Mother’s Day, 1919: "may you never get another letter from France as long as you live!"

What would be a better Mother’s Day present than learning that your child would be returning home from war? In 1919, thirty-year-old Lawrence Hopkins of the 305th Engineers was at the Forwarding Camp in Le Mans, France, awaiting orders to return home. On Wednesday, May 7, he wrote his mother in Ashtabula, Ohio, an early Mother’s Day letter in hopes he would be at sea by Sunday. With great excitement he announced the possibility of being home by Decoration Day (Memorial Day): 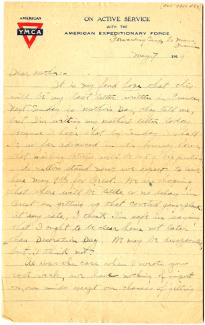 It is my fond hope that this will be my last letter written in France. Next Sunday is mother’s Day, they tell me, but I’m writing my mother’s letter today because I hope that by Sunday I shall be so far advanced in the journey home that mailing letters will be out of the question

As matters stand now, we expect to leave here May 9th for Brest. We are hoping that there will be little or no delay in Brest in getting up that coveted gang-plank. At any rate, I think I’m safe in saying that I ought to be clear home not later than Decoration Day. We may be disappointed, but I think not.

As was the case when I wrote you last week, we have nothing of import on our minds except our chances of getting out of here, so you mustn’t expect this to be much of a letter.

However, I guess I can concentrate for a sufficient time to write you my best Mother’s Day wishes. I send a goodly supply of same, and if you have any left over, just tum ’em over to Father!

And may you never get another letter from France as long as you live!

According to a June 6, 1919, letter to his father, Lawrence left camp on May 9 and reached Brest the next day. He did not embark for the United States until May 22. He landed in Hoboken, New Jersey, on June 3 and awaited discharge at Camp Dix.

The Gilder Lehrman Collection includes forty-one letters from Lawrence Hopkins and his brother Harold, written primarily to their parents. The letters were acquired as part of a larger World War I collection which does not include much background on Lawrence or his unit. If you have any information on Hopkins or the 305th Engineers, 80th Division of the American Expeditionary Force in World War I, please share it with us.