A Spotlight on a Primary Source by George H. W. Bush

On January 16, 1991, President George H. W. Bush announced the beginning of the military campaign to end an Iraqi occupation of neighboring Kuwait. The address was broadcast live on radio and television. It was the culmination of five months of lobbying by Bush for the United States to pursue a military response rather than economic sanctions against Iraq.

Iraq’s army had invaded the small, oil-rich country of Kuwait on August 2, 1990, and quickly overwhelmed the Kuwaiti forces. Saddam Hussein, the president of Iraq, wanted to control Kuwait’s oil supply and regain land that had been a province of Iraq before World War I. In response, the United Nations, the United States, and other countries denounced the invasion and demanded Iraq’s withdrawal. Four days later, President Bush sent Secretary of Defense Dick Cheney—rather than Secretary of State James A. Baker—to meet with King Fahd bin Abdulaziz Al Saud of Saudi Arabia. The two entered into an agreement for the United States to protect Saudi Arabia from the threat of an attack by Iraq. On August 8 the first US fighter planes arrived. More than 500,000 US troops were eventually stationed in Saudi Arabia.

On November 29, the UN Security Council passed a resolution authorizing the use of force against Iraq if it failed to withdraw by January 15, 1991. Massive bombing and airstrikes, known as Operation Desert Storm, began on January 16.

Bush had faced a lot of criticism for pursuing military action instead of economic sanctions against Saddam Hussein. To support his stance, in his speech on January 16 he drew attention to some of the atrocities committed in Kuwait by the Iraqi military:

While the world waited, Saddam Hussein systematically raped, pillaged, and plundered a tiny nation, no threat to his own. He subjected the people of Kuwait to unspeakable atrocities—and among those maimed and murdered, innocent children.

Bush also assured Americans that this conflict would not become another Vietnam:

I’ve told the American people before that this will not be another Vietnam, and I repeat this here tonight. Our troops will have the best possible support in the entire world, and they will not be asked to fight with one hand tied behind their back. I’m hopeful that this fighting will not go on for long and that casualties will be held to an absolute minimum.

The ground assault, known as Desert Sabre, began on February 24 and lasted only four days. On February 28, President Bush declared a cease-fire. On April 3, the UN Security Council passed Resolution 687, specifying conditions for a formal end to the conflict. Three days later Iraq accepted the resolution, and on April 11 the Security Council declared it in effect.

As I report to you, air attacks are underway against military targets in Iraq. We are determined to knock out Saddam Hussein’s nuclear bomb potential. We will also destroy his chemical weapons facilities. Much of Saddam’s artillery and tanks will be destroyed. Our operations are designed to best protect the lives of all the coalition forces by targeting Saddam's vast military arsenal. Initial reports from General Schwarzkopf are that our operations are proceeding according to plan.

Our objectives are clear: Saddam Hussein’s forces will leave Kuwait. The legitimate government of Kuwait will be restored to its rightful place, and Kuwait will once again be free. Iraq will eventually comply with all relevant United Nations resolutions, and then, when peace is restored, it is our hope that Iraq will live as a peaceful and cooperative member of the family of nations, thus enhancing the security and stability of the Gulf.

Some may ask: Why act now? Why not wait? The answer is clear: The world could wait no longer. Sanctions, though having some effect, showed no signs of accomplishing their objective. Sanctions were tried for well over 5 months, and we and our allies concluded that sanctions alone would not force Saddam from Kuwait.

While the world waited, Saddam Hussein systematically raped, pillaged, and plundered a tiny nation, no threat to his own. He subjected the people of Kuwait to unspeakable atrocities--and among those maimed and murdered, innocent children.

While the world waited, while Saddam stalled, more damage was being done to the fragile economies of the Third World, emerging democracies of Eastern Europe, to the entire world, including to our own economy.

This document is a draft revised by President Bush the day before he gave the address. The transcript of the final version is available here. 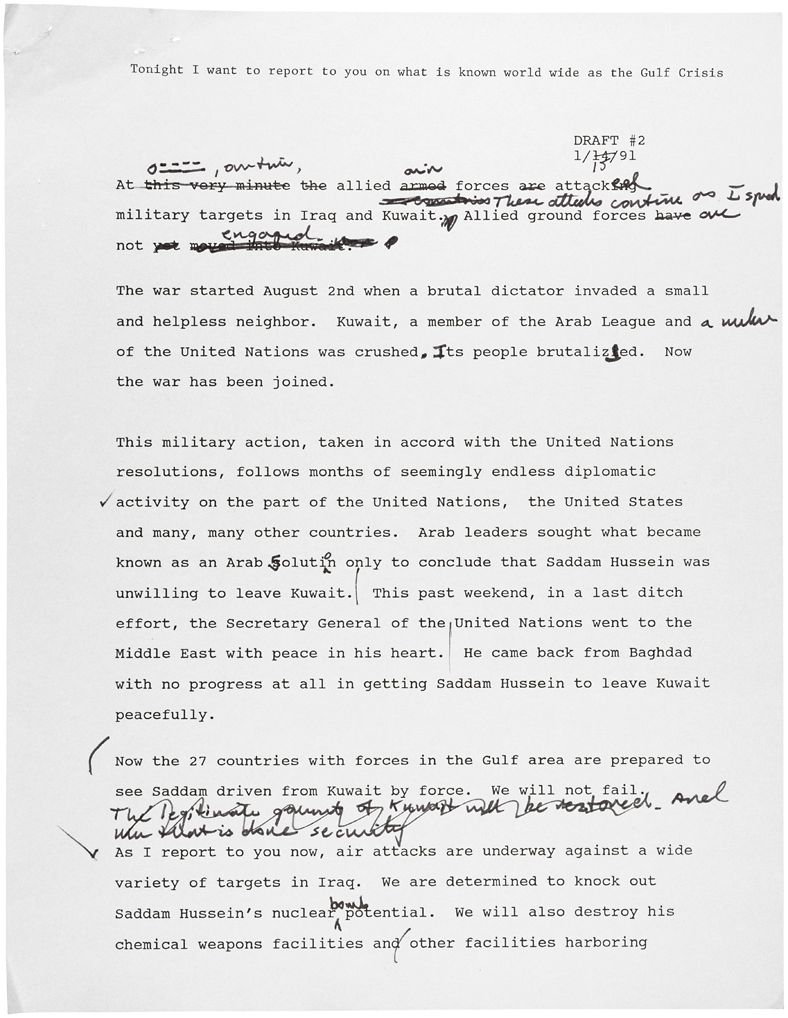 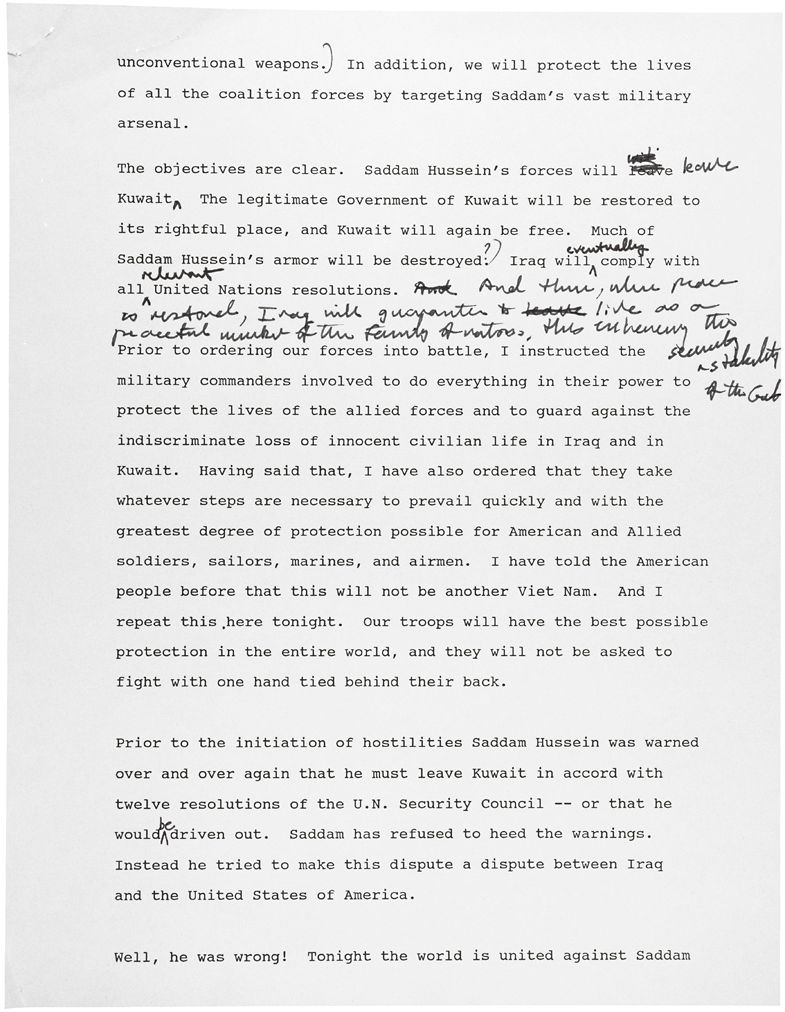 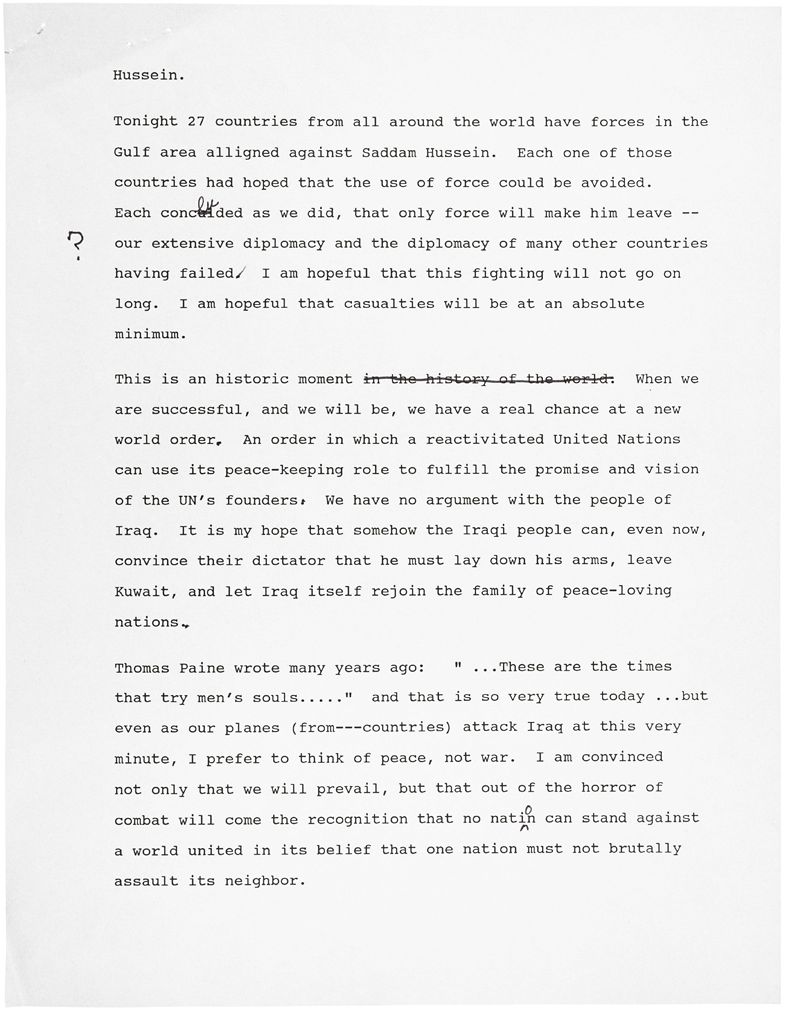 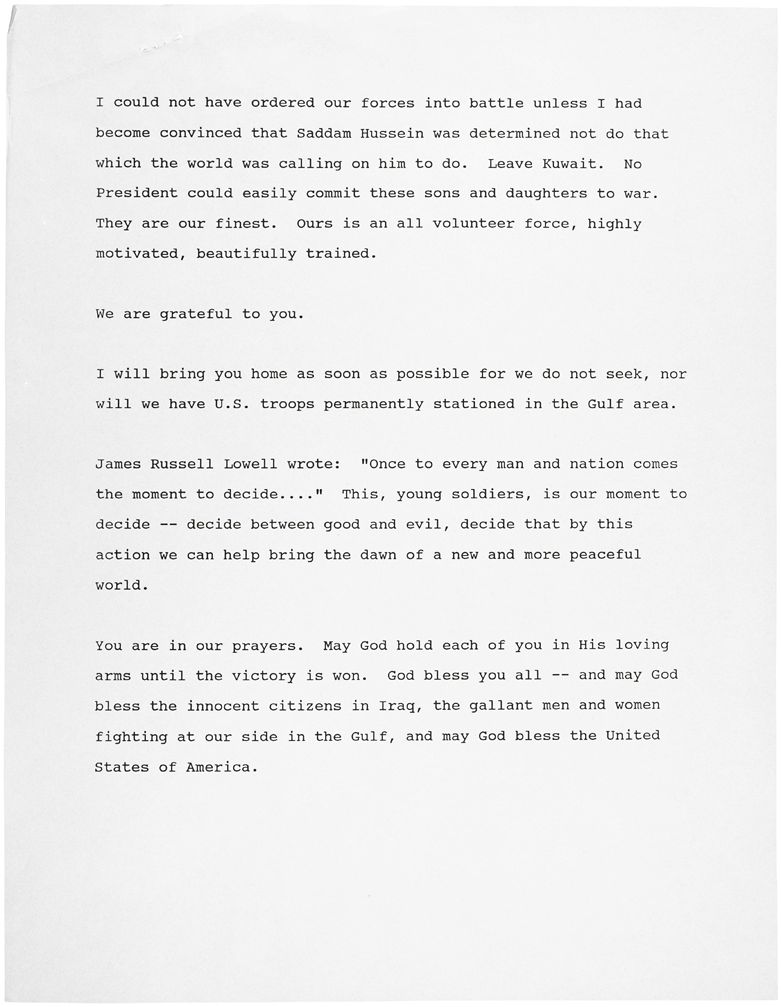 Respond to these two prompts based on the introduction and your knowledge of American history.

Respond to this prompt based on the introduction, the excerpt, and your knowledge of American history.

Respond to these two prompts based on the introduction, the full text of the speech, and your knowledge of history.