A Spotlight on a Primary Source by Amelia Earhart 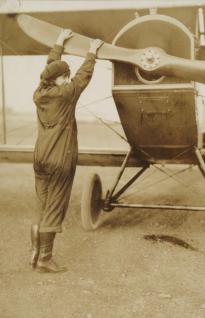 The first decades of the twentieth century brought a golden age of aviation. During this exciting period, many pioneering women defied traditional female roles to become pilots. Amelia Earhart is the most famous of this group of aviatrixes, but Neta Snook, the woman who taught Earhart how to fly, is often overlooked.

Snook had been flying for four years, having made a living as a test pilot and a barnstormer, when she met Earhart in December 1920 at California’s Kinner Field, where Snook was a flight instructor. Snook later described her first impression of Earhart: "I’ll never forget the day she and her father came to the field. I liked her on sight."[1] On January 3, 1921, Earhart took her first flying lesson with Snook. Already equipped with an impressive knowledge of aviation and an eagerness to fly, Earhart became Snook’s most famous student.

The two women grew close and discussed not only aviation but also philosophical matters. In her autobiography, I Taught Amelia to Fly (1974), Snook recounted an instance when Earhart, who was interested in world religions and cultures, had asked her to read the Koran. Snook refused, declaring that there was no mention of Mohammed in the Bible.[2] The two women remembered their disagreements fondly rather than bitterly, however, and nearly a decade after they first flew together, Earhart sent this friendly letter to her former instructor remembering their time together. On January 26, 1929, Earhart wrote, "My dear Neta: It is long ago that we flew together at Kinner Field, California. Yes, I do remember discussions of the Koran, and cold boiled potatoes." 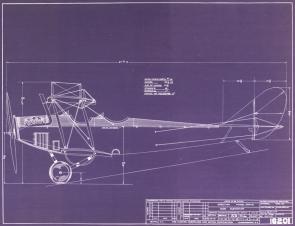 At the time this letter was written, Earhart was aviation editor at Cosmopolitan and was responsible for writing about the popularity and trends of aviation. She was involved in co-founding the Ninety-Nines, an organization of woman pilots still active today. Her career was full of "firsts"; she was the first woman passenger on a transatlantic flight, the first woman to fly solo across the Atlantic, and the first woman recipient of the flying cross. What would have been her greatest feat became her last adventure, however, as she set out to become the first person to fly around the world at the equator in 1937. Having completed 22,000 miles of the 27,000-mile trip, Earhart and her navigator, Frederick Noonan, disappeared over the Pacific on July 2, 1937.

By the time of Earhart’s disappearance, Neta Snook Southern had been retired from flying for fifteen years. (She had left aviation in 1922 after her marriage to William Southern.) The two women never had the chance, as Earhart wrote in 1929, to "have a few words about the old days." In 1977, forty years after Earhart’s disappearance and fifty-five years after her own last flight, Snook Southern took to the air again when she was invited to pilot a replica of Charles Lindbergh’s Spirit of St. Louis. 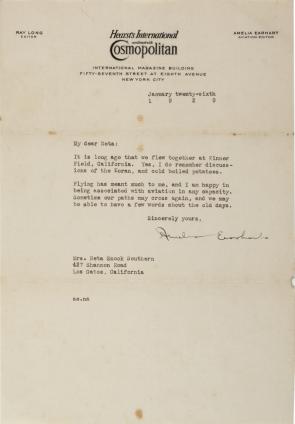 It is long ago that we flew together at Kinner Field, California. Yes, I do remember discussions of the Koran, and cold boiled potatoes.

Flying has meant much to me, and I am happy in being associated with aviation in any capacity. Sometime our paths may cross again, and we may be able to have a few words about the old days.

Read the introduction and the transcript of the letter and apply your knowledge of American history to answer these questions.