A Spotlight on a Primary Source by Bowman Gum Company 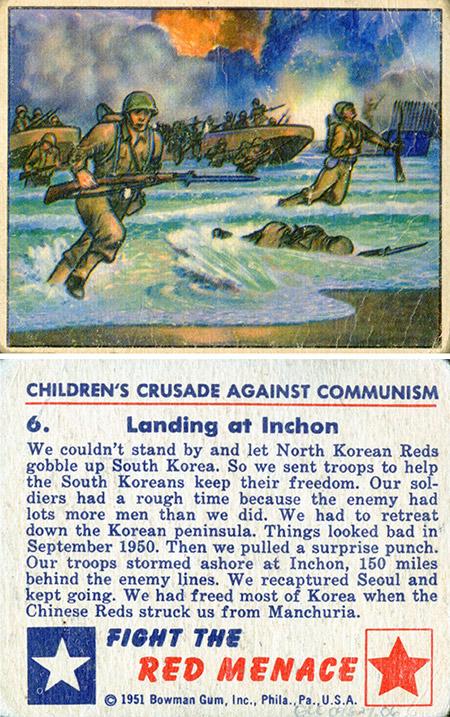 On June 25, 1950, war broke out on the Korean peninsula when the Soviet-backed Communist forces in North Korea invaded the recently founded democratic republic of South Korea. Following a unanimous UN resolution condemning the invasion, President Harry S. Truman committed US troops to the conflict. The United States took the lead in fighting North Korea to combat the spread of Communism. The events in Korea contributed to the escalation of the Cold War, a decades-long rivalry between the United States and the Soviet Union. Active combat ended in a cease-fire in 1953, but no peace treaty has ever been signed. The legacy of the Korean War continues to shape relations between the United States, South Korea, and North Korea.

This set of forty-eight trading cards entitled Fight the Red Menace: Children’s Crusade against Communism was designed to teach American children about the threatened spread of Communism. They were part of the propaganda initiative to gain the support of Americans for the war by creating fear and demonizing the enemy. Each card features a dramatic, colorful depiction of American military heroes and victories, or Communist villains and their atrocities. The text on the reverse uses strong language to focus on the threat posed by Communism, building on fears of infiltration at home and military attacks from abroad. The cards were officially marketed to children. However, the inclusion of a note encouraging children to tell their parents to read the Department of State Bulletin “if they want to learn more about the brutal conditions of life under communism” is a clear indication the cards were intended for an adult audience as well.

A PDF of the entire series is available here.

Read the introduction and view the trading cards. Then apply your knowledge of American history to answer these questions.