Bartolomé de Las Casas debates the subjugation of the Indians, 1550

A Spotlight on a Primary Source by Bartolomé de Las Casas 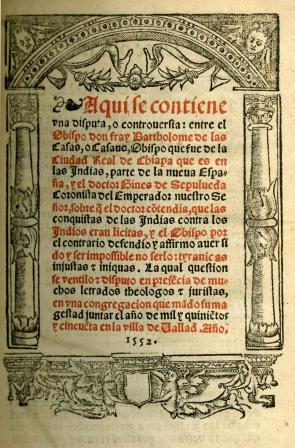 This tract, a summary of a debate concerning the subjugation of Indians, contains the arguments of Bartolomé de Las Casas, the Bishop of Chiapas, Mexico, and Juan Gines Sepulveda, an influential Spanish philosopher, concerning the treatment of American Indians in the New World.

Las Casas came to Hispaniola, in the Caribbean, in 1502 with a land grant, ready to seek his fortune. A Dominican friar nurtured Las Casas’s interest in the priesthood as well as his sympathy toward the suffering of the native inhabitants. In 1509, Las Casas renounced his land grant, released his slaves, and returned to Rome to take his religious vows. He returned to Hispaniola in 1512 as the first ordained priest in the Americas and denounced the Spanish exploitation of the Indians and the military conquest of the New World.

His efforts to end the encomienda system of land ownership and forced labor culminated in 1550, when Charles V convened the Council of Valladolid in Spain to consider whether Spanish colonists had the right to enslave Indians and take their lands.

Sepulveda argued against Las Casas on behalf of the colonists’ property rights. Sepulveda rationalized Spanish treatment of American Indians by arguing that Indians were "natural slaves" and that Spanish presence in the New World would benefit them.

Citing the Bible and canon law, Las Casas responded, "All the World is Human!" He contradicted Sepulveda’s assertions that the Indians were barbarous, that they committed crimes against natural law, that they oppressed and killed innocent people, and that wars should be waged against infidels. Las Casas managed to convinced the theologians at Valladolid that the Spanish policy was unjust and had to change. However, his victory had no impact on the colonists, who continued to enslave American Indians. Las Casas has been called the "father of anti-imperialism and anti-racism," and he greatly influenced the drive to abolish the Spanish encomienda system.

Transcript of the title page

Translation of the title page

Here is contained a dispute, or controversy between Bishop Friar Bartolomé de las Casas, or Casaus, formerly bishop of the royal city of Chiapa which is in the Indies, a part of New Spain, and Dr. Gines de Sepulveda, chronicler to the Emperor, our lord, in which the doctor contended: that the conquests of the Indies against the Indians were lawful; and the bishop, on the contrary, contended and affirmed them to have been, and it was impossible for them not to be, tyrannies, unjust and iniquitous. Which question was examined and defended in the presence of many learned theologians and jurists in a council ordered by his Majesty to be held in the year one thousand and five hundred and fifty in the town of Valladolid. Year 1552.

Read the introduction and examine the document image. Then answer the following questions based on your knowledge of American history.