The Battles of Lexington and Concord, 1775

A Spotlight on a Primary Source by Ezekiel Russell

By April 1775, reconciliation between England and the thirteen colonies had failed. Two months earlier, Parliament had declared Massachusetts to be in a state of rebellion, and on April 14 General Thomas Gage received secret orders from England to suppress the rebels. On the night of April 18, Gage sent 700 British soldiers to Concord to seize patriot supplies there. At dawn the British reached the town of Lexington, just east of Concord, where they found seventy American militiamen waiting for them on the village green.

Warned of the British troops’ movements, the Lexington patriots had assembled in an effort to halt British progress toward Concord. Both sides stood their ground, and in a tense moment, a shot was fired. Though it’s unclear which side, British soldier or American patriot, fired that first “shot heard ’round the world,” history remembers it as the start of the American Revolutionary War.

Sending these orders to Captain John Currier on the day of the battles, patriot Colonel Isaac Merrill wrote that after the engagement at Lexington (which left eight Americans dead) the British troops “thence proceed to Concord Killing and Destroying our men and interest.” He ordered Currier to “Mobilize and muster as many of your under officers and Soldiers as you can possible to meet immedially to Some Suitable place: and then to march of forthwith to Concord or Else where as in your Descretion you Shall think best to the reliefe of our Friend[s] and Country.” By the end of April 19, the British had suffered 273 casualties; the Americans, 93.

Americans immediately understood the momentous significance of the Battles of Lexington and Concord. Ezekiel Russell, a Salem, Massachusetts, printer, quickly produced this broadside entitled “Bloody Butchery by the British Troops,” which detailed the battles and the American casualties. Recognizing the historic weight of the day, Russell’s broadside urged “a perpetual memorial of that important event, on which, perhaps, may depend the future Freedom and Greatness of the Commonwealth of America.”

from “Bloody Butchery by the British Troops” (GLC04810)

Being the PARTICULARS of the VICTORIOUS BATTLE fought at and near CONCORD, situated Twenty Miles from Boston, in the Province of the Massachusetts-Bay, in New-England, between Two Thousand Regular Troops, belonging to his Britannic Majesty, and a few Hundred Provincial Troops, belonging to the Province of Massachusetts-Bay, which lasted from sunrise to sunset, on the 19th of April, 1775, when it was decided greatly in favor of the latter. These particulars are now published in this cheap form, at the request of the friends of the deceased WORTHIS, who died gloriously fighting in the cause of liberty and their country, and it is their sincere desire that every Householder in the country, who are sincere well-wishers to America, may be possessed of the same, either to frame and glass, or otherwise to preserve in their houses, not only as a Token of Gratitude to the memory of the Deceased Forty Persons, but as a perpetual memorial of that important even, on which, perhaps, may depend on the future Freedom of Greatness of the Commonwealth of America. To which is annexed, a Funeral Elegy on those who were slain in the Battle. 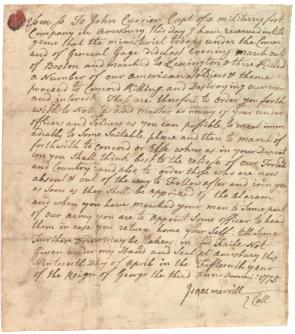 [Essex ss] To John Currier Capt of a militerry foot Company in Amesbury this Day I have received intiligence that the ministeriel troops under the Command of General Gage did Last evening march out of Boston and marched to Lexington & there Killed a Number of our American Soldiers & thence proceed to Concord Killing and Destroying our men and interest. These are therefore to Order you forthwith to Mobilize and muster as many of your under officers and Soldiers as you can possible to meet immediatly to Some Suitable place: and then to march of forthwith to Concord or Else where as in your Descretion you Shall think best to the reliefe of our Friend and Country: and also to order those who are now absent & out of the way to Follow after and ioin you as Soon as they shall be apprized of the Alaram and when you have marched your men to Some part of our army you are to appoint some officer to head them in case you return home your Self: till Some Further order may be taken: in this Faile Not Given under my Hand and Seal at Amesbury this Ninteenth Day of April in the Fifteenth year of the Reign of George the third Anno Domini: 1775
Isaac merrill

Read the introduction and examine the documents in order to answer the following questions.