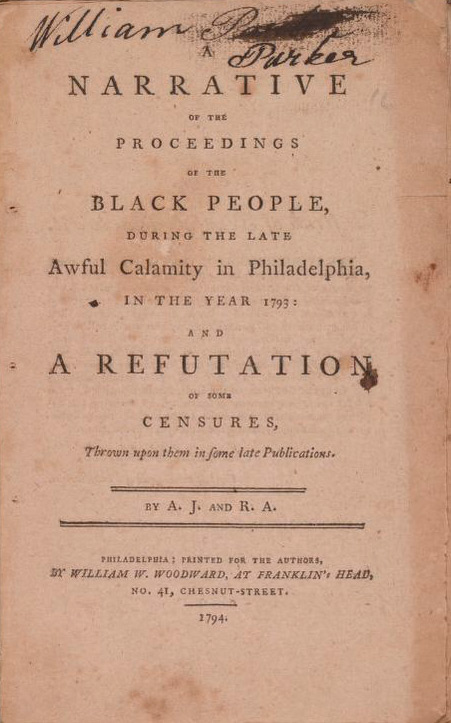 The new republic was only four years old, its capital recently established in Philadelphia, when the country suffered its first catastrophic epidemic. Yellow fever broke out in August 1793 and ravaged the city for three months, only subsiding in November. Twenty thousand people fled the city, as many as 5,000 died (ten percent of Philadelphia’s population), and countless thousands of others suffered illness and hardship. No one then knew what caused the disease (a mosquito-borne virus), there was no effective treatment, and the epidemic only ended with the coming of cold weather that suppressed the mosquitoes.

There was acute need for volunteers to nurse the sick, help the bereft, and bury the dead. The Black community, under the leadership of Absalom Jones and Richard Allen, answered the call. A former slave who had worked to purchase his wife’s freedom and then was manumitted himself at age thirty-eight, Jones was an Episcopalian minister and leader in the Black community. Fourteen years younger than Jones, and like him a former slave who had purchased his own freedom, Richard Allen was a Methodist who would become the founder of the AME Church. Together, Jones and Allen were co-leaders of the Free African Society, a mutual aid society of free Blacks, through which they organized the many volunteers who stepped forward to help.

In November, shortly after the contagion died down, people came back, and life began to return to normal, the publisher Matthew Carey (who had himself fled the town) printed a pamphlet called A Short Account of the Malignant Fever, Lately Prevalent in Philadelphia in which he recounted the horrors of the epidemic but also impugned members of the Black community for somehow spreading the disease, charging extortionate fees for their work, and stealing from the dead. Indignant at these racist aspersions and sensitive to the need to defend the image of their community, Absalom Jones and Richard Allen fought back.

The result, in early 1794, was the pamphlet from which the excerpts below are reprinted: A Narrative of the Proceedings of the Black People, During the Late Awful Calamity in Philadelphia. In it, Jones and Allen meticulously refuted Carey’s charges with eyewitness testimony and hard evidence, while also chronicling the many acts of mercy and generosity performed by individuals—most of them named in full—from the Black community. The reputation of their people was vindicated, and it is no coincidence that when each of these Black ministers founded his own independent church later in 1794, there was extensive support from the White community. Absalom Jones and Richard Allen would continue their spiritual, political, and civic leadership well into the 1800s (Jones lived until 1816, Allen to 1831), and enter history as two of the heroic figures of the founding era.

from A Narrative of the Proceedings of the Black People, During the Late Awful Calamity in Philadelphia, 1794[1]

In consequence of a partial representation of the conduct of the people who were employed to nurse the sick, in the late calamitous state of the city of Philadelphia, we are solicited, by a number of those who feel themselves injured thereby, and by the advice of several respectable citizens, to step forward and declare facts as they really were; seeing that from our situation, on account of the charge we took upon us, we had it more fully and generally in our power, to know and observe the conduct and behaviour of those that were so employed.

Early in September, a solicitation appeared in the public papers, to the people of colour to come forward and assist the distressed, perishing, and neglected sick; with a kind of assurance, that people of our colour were not liable to take the infection. Upon which we and a few others met and consulted how to act on so truly alarming and melancholy an occasion. After some conversation, we found a freedom to go forth, confiding in him who can preserve in the midst of a burning fiery furnace, sensible that it was our duty to do all the good we could to our suffering fellow mortals. We set out to see where we could be useful. The first we visited was a man in Emsley’s Alley, who was dying, and his wife lay dead at the time in the house, there were none to assist but two poor helpless children. We administered what relief we could, and applied to the overseers of the poor to have the woman buried. We visited upwards of twenty families that day—they were scenes of woe indeed! The Lord was pleased to strengthen us, and remove all fear from us, and disposed our hearts to be as useful as possible. . . .

Mr. Carey tells us, Bush-hill exhibited as wretched a picture of human misery, as ever existed. A profligate abandoned set of nurses and attendants (hardly any of good character could at that time be procured,) rioted on the provisions and comforts, prepared for the sick, who (unless at the hours when the doctors attended) were left almost entirely destitute of every assistance. The dying and dead were indiscriminately mingled together. The ordure and other evacuations of the sick, were allowed to remain in the most offensive state imaginable. Not the smallest appearance of order or regularity existed. It was in fact a great human slaughter-house, where numerous victims were immolated at the altar of intemperance.

It is unpleasant to point out the bad and unfeeling conduct of any colour, yet the defence we have undertaken obliges us to remark, that although “hardly any of good character at that time could be procured,” yet only two black women were at this time in the hospital, and they were retained and the others discharged, when it was reduced to order and good government.

The bad consequences many of our colour apprehend from a partial relation of our conduct are, that it will prejudice the minds of the people in general against us—because it is impossible that one individual, can have knowledge of all, therefore at some future day, when some of the most virtuous, that were upon most praise-worthy motives, induced to serve the sick, may fall into the service of a family that are strangers to him, or her, and it is discovered that it is one of those stigmatised wretches, what may we suppose will be the consequence? Is it not reasonable to think the person will be abhorred, despised, and perhaps dismissed from employment, to their great disadvantage, would not this be hard? and have we not therefore sufficient reason to seek for redress? We can with certainty assure the public that we have seen more humanity, more real sensibility from the poor blacks, than from the poor whites. When many of the former, of their own accord rendered services where extreme necessity called for it, the general part of the poor white people were so dismayed, that instead of attempting to be useful, they in a manner hid themselves—a remarkable instance of this—A poor afflicted dying man, stood at his chamber window, praying and beseeching every one that passed by, to help him to a drink of water; a number of white people passed, and instead of being moved by the poor man’s distress, they hurried as fast as they could out of the sound of his cries—until at length a gentleman, who seemed to be a foreigner came up, he could not pass by, but had not resolution enough to go into the house, he held eight dollars in his hand, and offered it to several as a reward for giving the poor man a drink of water, but was refused by every one, until a poor black man came up, the gentleman offered the eight dollars to him, if he would relieve the poor man with a little water, “Master” replied the good natured fellow, “I will supply the gentleman with water, but surely I will not take your money for it” nor could he be prevailed upon to accept his bounty: he went in, supplied the poor object with water, and rendered him every service he could.

A poor black man, named Sampson, went constantly from house to house where distress was, and gave assistance without fee or reward; he was smote with the disorder and died, after his death his family were neglected by those he had served.

Sarah Bass, a poor black widow, gave all the assistance she could, in several families, for which she did not receive any thing; and when any thing was offered her, she left it to the option of those she served.

A woman of our colour nursed Richard Mason and son, when they died, Richard’s widow considering the risk the poor woman had run, and from observing the fears that sometimes rested on her mind, expected she would have demanded some thing considerable, but upon asking what she demanded, her reply was half a dollar per day. Mrs. Mason, intimated it was not sufficient for her attendance, she replied it was enough for what she had done, and would take no more. Mrs. Mason’s feelings were such, that she settled an annuity of six pounds a year, on her, for life. Her name is Mary Scott.

An elderly black woman nursed __________ with great diligence and attention; when recovered he asked what he must give for her services—she replied “a dinner master on a cold winter’s day,” and thus she went from place to place rendering every service in her power without an eye to reward.

A young black woman, was requested to attend one night upon a white man and his wife, who were very ill, no other person could be had;—great wages were offered her—she replied, I will not go for money, if I go for money God will see it, and may be make me take the disorder and die, but if I go, and take no money, he may spare my life. She went about nine o’clock, and found them both on the floor; she could procure no candle or other light, but staid with them about two hours, and then left them. They both died that night. She was afterward very ill with the fever—her life was spared.

Cæsar Cranchal, a black man, offered his services to attend the sick, and said, I will not take your money. I will not sell my life for money. It is said he died with the flux.

A black lad, at the Widow Gilpin’s, was intrusted with his young Master’s keys, on his leaving the city, and transacted his business, with the greatest honesty, and dispatch, having unloaded a vessel for him in the time, and loaded it again.

A woman, that nursed David Bacon, charged with exemplary moderation, and said she would not have any more.

It may be said, in vindication of the conduct of those, who discovered ignorance or incapacity in nursing, that it is, in itself, a considerable art, derived from experience, as well as the exercise of the finer feelings of humanity—this experience, nine tenths of those employed, it is probable were wholly strangers to.

We do not recollect such acts of humanity from the poor white people, in all the round we have been engaged in. We could mention many other instances of the like nature, but think it needless.

It is unpleasant for us to make these remarks, but justice to our colour demands it.

[1] This text will be reprinted in the anthology Black Writers of the Founding Era, 1760−1800, ed. James G. Basker (Library of America, forthcoming).