A Spotlight on a Primary Source by Hugh AuldJ. MeredithWalter Lowrie 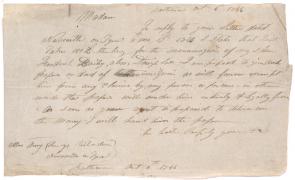 After he had escaped from slavery in 1838, Frederick Douglass became a well-known orator and abolitionist. He wrote an autobiography in 1845, but because he was a runaway slave, its publication increased the chances that he would be captured and returned to slavery. Douglass went on a speaking tour of Ireland and England to remove himself from immediate danger. In 1846, his supporters in England made arrangements to purchase his freedom. They contacted Hugh Auld, whose family had held Douglass (then known as Frederick Bailey) in slavery.

These documents illustrate some of the negotiations between Anna Richardson in England and Hugh Auld in Maryland as they arranged Douglass’s manumission. The situation was complicated by the fact that Hugh Auld and his brother, Thomas Auld, had both owned Douglass at different times. Through Walter Lowrie in New York, the Richardsons insisted that Hugh prove his full ownership of Douglass or have Thomas sign the paperwork as well. Thomas sold his portion to Hugh, and Hugh proceeded to finalize the paperwork to "render him entirely & Legally free" in December 1846. As a result, Douglass was able to return to the United States a free man.

A full transcript of Hugh Auld’s letter to Anna Richardson can be found here.

A transcript of Walter Lowrie’s letter to Hugh Auld can be found here.

A transcript of J. Meredith’s receipt for professional services in Douglass’s manumission can be found here.

In reply to your Letter dated Newcastle on Tyne 8th mo 17th 1846 I State that I will Take 150 ₤ Sterling for the manumassion [sic] of my slave Frederick Bailey, alias, Douglass – I am prepared to give such papers or deed of Manumission as will forever exempt him from any claims by any person or persons, in other words the papers will render him entirely & Legally free.

As soon as your agent is prepared to deliver me the money I will hand him the papers.

Read the introduction, the excerpt, and the transcripts, and study the images. Then apply your knowledge of American history to answer the following questions: