Charles Sumner on Reconstruction and the South, 1866

A Spotlight on a Primary Source by Charles Sumner 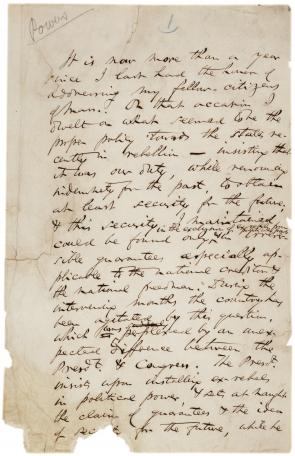 By 1865 there were sharp differences of opinion about the rights of freedmen and the governance of the defeated Southern states among political leaders in Congress and the Executive Branch in Washington, DC. Conflict among Republicans, Radical Republicans, and Democrats led to an all-out political war between President Andrew Johnson and members of Congress. In these notes for the “One Man Power vs. Congress” address he gave in Boston on October 2, 1866, Charles Sumner (Mass.), the key Radical Republican leader, accused Johnson of jeopardizing the North’s victory in the war. Sumner asserted that if Johnson had his way, “the plighted faith of the Republic will be broken . . . the Rebellion itself will flaunt its insulting power; the whole country . . . will be disturbed; and the rebel region will be handed over to misrule & anarchy.” Sumner declared that if, on the other hand, Congress’s approach to Reconstruction prevailed, the “faith of the Republic will be preserved . . . the Rebellion itself will be trampled out forever; the whole country . . . will be at peace; the rebel region, no longer harrassed by controversy & injustice, will enjoy the richest fruits of security & reconciliation.”

The question at issue is one of the vastest ever presented for practical decision, involving the name & weal of this Republic at home & abroad. It is not a military question; it is a question of statesmanship. We are to secure by counsel what was won by the war. Failure now will make the war itself a failure, surrender now will undo all our victories. Let the President prevail, & straightway the plighted faith of the Republic will be broken; – the national creditor & the national freedman will be sacrificed; – the Rebellion itself will flaunt it insulting power; – the whole country in its length & breadth will be disturbed; – & the rebel region will be handed over to misrule & anarchy.

Read the document introduction and the excerpt, and apply your knowledge of American history in order to answer the questions that follow.