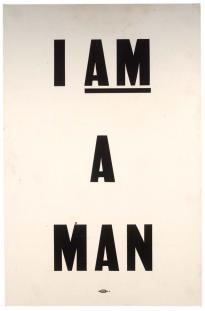 Memphis sanitation workers, the majority of them African American, went out on strike on February 12, 1968, demanding recognition for their union, better wages, and safer working conditions after two trash handlers were killed by a malfunctioning garbage truck. As it dragged on through March, with the Memphis mayor refusing to negotiate, the strike gained national attention. As they marched, striking workers carried copies of a poster declaring "I AM A MAN," a statement that recalled a question abolitionists posed more than 100 years earlier, "Am I not a man and a brother?"

Martin Luther King Jr. joined the cause, speaking to a crowd of 6,000 in late March and returning on April 3 to deliver one of his most famous speeches, "I’ve Been to the Mountaintop." King placed the strike in a larger context, declaring, "The masses of people are rising up. And wherever they are assembled today, whether they are in Johannesburg, South Africa; Nairobi, Kenya; Accra, 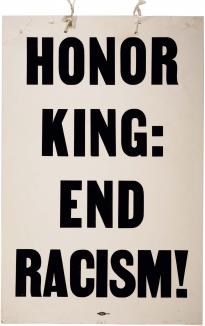 King was assassinated at Memphis’s Lorraine Motel the next night, just one day before a massive rally was planned. On April 8, four days after King’s assassination, his widow, Coretta Scott King, led some 20,000 marchers through the streets of Memphis, holding copies of another poster that read, "HONOR KING: END RACISM!" The strike ended on April 16, with the city agreeing to union recognition and raises.

Read the document introduction, examine the images, and apply your knowledge of American history in order to answer these questions.