A Spotlight on a Primary Source by William E. Mitchell 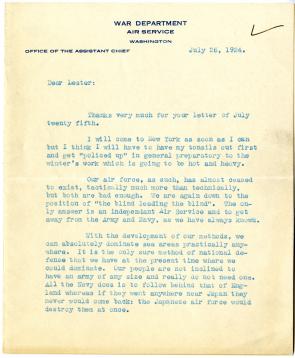 In this July 1924 letter to aviation pioneer and publisher Lester D. Gardner, Brigadier General William "Billy" Mitchell prophesied the coming tide of Japanese militarism. Concerned about Japan’s growing military power in the skies, Mitchell argued exhaustively for the creation of a branch of the US military separate from the Army and Navy and dedicated to the air. "With the development of our methods," he wrote, "we can absolutely dominate sea areas practically anywhere. It is the only sure method of national defense that we have at the present time where we could dominate."

Following World War I, the US military scaled back its focus on the development of a formidable air force. Without a dedicated US air force, and facing the prowess and strength of Japanese aviation, Mitchell foresaw destruction as the outcome of any future American military intervention in Japan. Of the US Navy, Mitchell wrote: "if they went anywhere near Japan they never would come back: the Japanese air force would destroy them at once." Mitchell’s outspoken criticism of his superiors earned him a demotion to colonel the year after this letter was written, and he was forced into an early retirement following a court martial conviction stemming from his accusations against military leadership.

The Japanese attack on Pearl Harbor on December 7, 1941, brought to life the threat Mitchell had warned of two decades earlier. Mitchell, however, did not live to see his predictions come true. He died on February 19, 1936. Following the Pearl Harbor attack, however, Mitchell was posthumously promoted to major general, and in 1946 he was awarded the Congressional Medal of Honor in recognition of his tremendous foresight concerning the development of America’s aviation forces.

Our air force, as such, has almost ceased to exist, tactically much more than technically, but both are bad enough. We are again down to the position of "the blind leading the blind". The only answer is an independant Air Service and to get away from the Army and Navy, as we have always known.

With the development of our methods, we can absolutely dominate sea areas practically anywhere. It is the only sure method of national defense that we have at the present time where we could dominate. Our people are not inclined to have an army of any size and really do not need one. All the Navy does is to follow behind that of England whereas if they went anywhere near Japan they never would come back: the Japanese air force would destroy them at once.

It is pretty near time for the American people to dig into these things and find out what it is all about.

View all pages of this letter here

Read the document introduction, the excerpt, and the letter. Then apply your knowledge of American history in order to answer the questions that follow.