A Spotlight on a Primary Source by Paul Jones Semmes 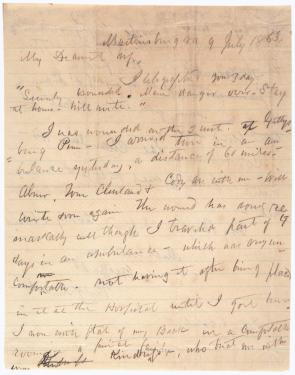 The Civil War was the bloodiest in the nation’s history, with 618,000 Union and Confederate soldiers perishing in the war. Among the nearly 8,000 men mortally wounded at the Battle of Gettysburg in July 1863 were twelve commanding generals. This loss of combat leadership, which was the most severe of the entire war, would reverberate for months thereafter. Neither the Army of the Potomac nor the Army of Northern Virginia would return to the battlefield until the following spring.

On the day before his death in a Virginia hospital, Confederate Brigadier General Paul Semmes, who was wounded at Gettysburg, wrote the following letter to his wife. His handwriting is evidence of the severity of his wounds. Such deathbed letters testify to Americans’ yearnings to connect with loved ones as they faced their own mortality.

I telegraphed you 3 day: “Seriously wounded. Main danger over. Stay at home. Will write.”

I was wounded on the 2 inst. at Gettysburg, Penn. I arrived here in an ambulance yesterday, a distance of 60 miles. Abrm, Wm. Cleveland & Cody are with me – will write soon again. The wound has done remarkably well though I traveled part of 4 days in an ambulance – which was very uncomfortable. not leaving it after being placed in it at the Hospital until I got here I now write flat of my Back in a Comfortable room in a private family who treat me with kindness.

I was wounded in the leg but stopped the flow of blood in the field by a Tournequet applied by myself and drawn by one of my men of the 10 Ga & lost but little blood.

Much love to all

God will fully spare my life. We all have cause to be thankful to Him.

Read the document introduction and the transcript, and apply your knowledge of American history in order to answer the questions that follow.