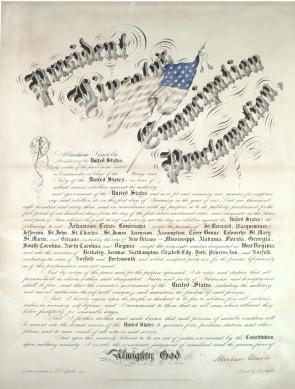 The Emancipation Proclamation was shaped by both pragmatic considerations and Lincoln’s deeply held, lifelong hatred of slavery. It was timed, after the Union victory at Antietam, to strike a military blow against the South’s economic and social infrastructure, and was taken in the full understanding (given the experience of "contrabands") that the advance of the Union armies would free more and more fugitive slaves. The Proclamation transformed the war to preserve the Union into a war to save the Union and end slavery.

This elaborately decorated copy of the Emancipation Proclamation was designed by a fourteen-year-old boy and signed by Lincoln himself. In the proclamation, which went into effect on January 1, 1863, Lincoln used no uncertain terms in declaring that "all persons held as slaves within any State or designated part of a State . . . in rebellion against the United States, shall be then, thenceforward, and forever free."

[O]n the first day of January, in the year of our Lord one thousand eight hundred and sixty-three, all persons held as slaves within any State or designated part of a State, the people whereof shall then be in rebellion against the United States, shall be then, thenceforward, and forever free; and the Executive Government of the United States, including the military and naval authority thereof, will recognize and maintain the freedom of such persons, and will do no act or acts to repress such persons, or any of them, in any efforts they may make for their actual freedom.

Read the document introduction and the transcript, and apply your knowledge of American history in order to answer the questions that follow.