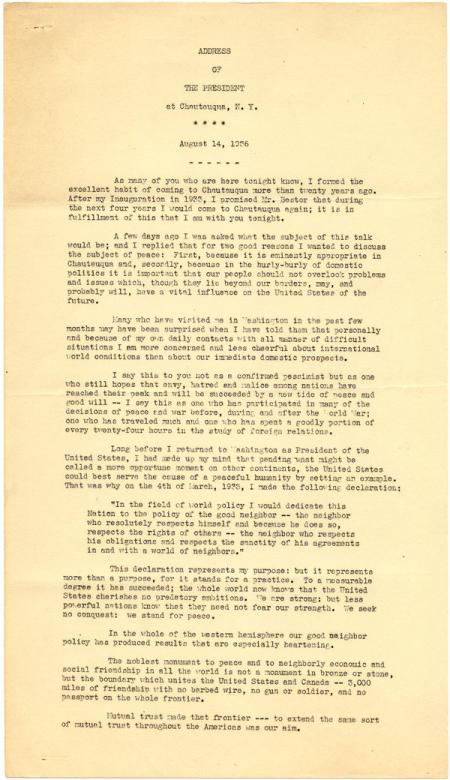 On August 14, 1936, President Franklin D. Roosevelt spoke at length on the state of international affairs in an address delivered at Chautauqua, New York. Roosevelt’s speech focused on maintaining peace in the face of increasing hostilities in Europe. Even though the country was still in the midst of the Great Depression, the President remarked, "I am more concerned and less cheerful about international world conditions than about our immediate domestic prospects."

In 1935 and 1936, the prospects for world peace deteriorated as Germany denounced the Treaty of Versailles, rebuilt its military, and invaded the Rhineland. The threat of war loomed. Roosevelt’s outline of the causes of war does not specifically name Nazi Germany as the threat, but none would mistake his target:

Many causes produce war. There are ancient hatreds, turbulent frontiers, the "legacy of old forgotten, far off things, and battles long ago." There are new-born fanaticisms, convictions on the part of certain peoples that they have become the unique depositories of ultimate truth and right. . . . A dark modern world faces wars between conflicting economic and political fanaticisms in which are intertwined race hatreds.

In contrast, he pointed to the "good neighbor" policy among the nations of the Americas as an example of international cooperation:

Throughout the Americas the spirit of the good neighbor is a practical and living fact. The twenty-one American Republics are not only living together in friendship and in peace; they are united in the determination so to remain.

Even though Roosevelt argued for peace and US neutrality in any forthcoming conflict, he concluded the speech by warning that "if there are remoter nations that wish us not good but ill, they know that we are strong; they know that we can and will defend ourselves and defend our neighborhood."

In the whole of the western hemisphere our good neighbor policy has produced results that are especially heartening.

The noblest monument to peace and to neighborly economic and social friendship in all the world is not a monument in bronze or stone, but the boundary which unites the United States and Canada -- 3,000 miles of friendship with no barbed wire, no gun or soldier, and no passport on the whole frontier.

Mutual trust made that frontier --- to extend the same sort of mutual trust throughout the Americas was our aim.

The American Republics to the south of us have been ready always to cooperate with the United States on a basis of equality and mutual respect, but before we inaugurated the good neighbor policy there was among them resentment and fear, because certain administrations in Washington had slighted their national pride and their sovereign rights.

In pursuance of the good neighbor policy, and because in my younger days I had learned many lessons in the hard school of experience, I stated that the United States was opposed definitely to armed intervention. . . .

Throughout the Americas the spirit of the good neighbor is a practical and living fact. The twenty-one American Republics are not only living together in friendship and in peace; they are united in the determination so to remain. . . .

We can keep out of war if those who watch and decide have a sufficiently detailed understanding of international affairs to make certain that the small decisions of each day do not lead toward war and if, at the same time, they possess the courage to say "no" to those who selfishly or unwisely would let us go to war.

Of all the nations of the world today we are in many ways most singularly blessed. Our closest neighbors are good neighbors. If there are remoter nations that wish us not good but ill, they know that we are strong; they know that we can and will defend ourselves and defend our neighborhood.

We seek to dominate no other nation. We ask no territorial expansion. We oppose imperialism. We desire reduction in world armaments.

We believe in democracy; we believe in freedom; we believe in peace. We offer to every nation of the world the handclasp of the good neighbor. Let those who wish our friendship look us in the eye and take our hand.

Read the introduction and the excerpt and study the typescript of the entire speech. Then apply your knowledge of American history to answer the following questions. Cite passages from the text to support your argument.