A Spotlight on a Primary Source by Sebastian Brandt 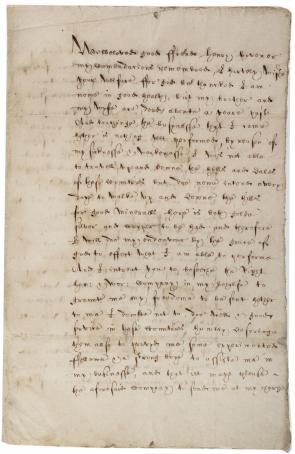 The first English settlers in Jamestown, Virginia, who arrived in 1607, were eager to find gold and silver. Instead they found sickness and disease. Eventually, these colonists learned how to survive in their new environment, and by the middle of the seventeenth century they discovered that their fortunes lay in growing tobacco.

This 1622 letter from Jamestown colonist Sebastian Brandt to Henry Hovener, a Dutch merchant living in London, provides a snapshot of the colony in flux. Brandt, who likely arrived in 1619 in a wave of 1,200 immigrants, writes of his wife’s and brother’s deaths the previous year almost in passing. He mentions that, due to his own illness, he “was not able to travell up and downe the hills and dales of these countries but doo nowe intend every daye to walke up and downe the hills for good Mineralls here is both golde silver and copper.” Most of Brandt’s letter is devoted to its real purpose: putting in orders for cheese, vinegar, tools, spices, and other assorted goods from the London Company that were not available in Virginia. Interestingly, he promises to pay in tobacco and furs—not in the gold and copper he’s looking for.

We know little about Brandt. He does not appear in any known existing official records, and historians presume he died not long after writing this letter. The glimpse he offers into early Jamestown serves as a tantalizing example of the challenges and thrills of studying colonial American history.

My comendations remembred, I hartely [wish] your welfare for god be thanked I am now in good health, but my brother and my wyfe are dead aboute a yeare pass’d And touchinge the busynesse that I came hither is nothing yett performed, by reason of my sicknesse & weaknesse I was not able to travell up and downe the hills and dales of these countries but doo nowe intend every daye to walke up and downe the hills for good Mineralls here is both golde silver and copper to be had and therefore I will doe my endeavour by the grace of god to effect what I am able to performe And I intreat you to beseeche the Right Hon: & Wor: Company in my behalfe to grant me my freedome to be sent either to me I dowbte not to doo well & good service in these countries humbly desyringe them also to provyde me some [appointed] fellowe & a strong boye to assiste me in my businesse, and that it may please the aforesaid Company to send me at my charge a bed wth a bolster and cover and some Linnen for shirtes and sheetes. Sixe fallinge bands wth Last Size pairs of shoes twoo pairs of bootes three pairs of cullered stockings and garters wth three pairs of lether gloves some powder and shott twoo little runletts of oyle and vinnegar some spice & suger to comfort us here in our sicknesse abowte ffyftie pounds weight of holland and Englishe cheese together, Lykewyse some knyves, spoons, combes and all sorts of cullerd beads as you knowe the savage Indians use Allso one Rundlett wth all sortes of yron nayles great and small, three haire sives, two hatchetts wth twoo broad yrons and some Allum And send all these necessaries thinges in a dry fatt wth the first shippinge dyrected unto Mr. Pontes in James Towne here in Virginia And whatsoever this all costes I will not onely wth my moste humble service but allso wth some good Tobacco Bevor and Otterskins and other commodities here to be had recompence the Company for the same And yf you could send for my brother Phillipps Sonne in Darbesheere to come hether itt [were] a great commoditie ffor me or suche another used in minerall workes And thus I comitt you to the Almighty. Virginia 13 January 1622.