A Spotlight on a Primary Source by John F. Kennedy 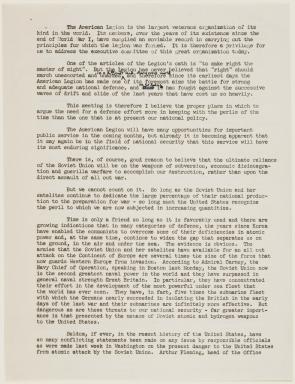 On October 16, 1953, Democratic Senator John F. Kennedy spoke at an executive meeting of the American Legion at the organization’s national headquarters in Indianapolis, Indiana. Addressing members of the United States’ largest veterans service organization, Kennedy criticized Republican President Dwight D. Eisenhower’s defense policy, pointing to the weakness of the American Air Force in comparison to the Soviets’. Kennedy argued for a "defense effort more in keeping with the perils of our time" and advocated for developing "a Strategic Air Force with sufficient retaliatory powers to threaten a potential aggressor with havoc and ruin." Appealing to the crowd of veterans, Kennedy asserted that the United States should not "be satisfied with anything less than an Air Force second to none. Today we do not have it."

First, that while we should not neglect our continental and civil defense systems at present, it can be assumed that an attacking force if equipped with atomic and hydrogen bombs could bring about widespread destruction and possibly speedy victory.

Secondly, we can be sure that the Soviets today are making a maximum effort to improve their capabilities, in both air power and atomic and hydrogen weapons.

Thirdly, in view of these facts it appears obvious that the United States has no alternative than to give priority to the development of a Strategic Air Force with sufficient retaliatory powers to threaten a potential aggressor with havoc and ruin.

Fourthly, I do not believe that the present program of air power expansion gives us such an Air Force. Our present effort should be judged not in comparison with what we have done in the past but rather with what the Soviets are now doing today. If we do this, we cannot help but be alarmed by our present progress.

Read the document introduction and the excerpt. Then apply your knowledge of American history in order to answer the questions that follow.