Lincoln on abolition in England and the United States, 1858 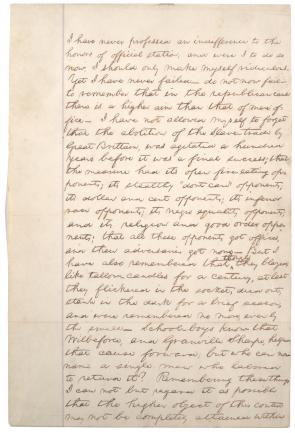 Though Lincoln spoke frequently during the 1858 Illinois Senate race against Stephen Douglas—a campaign that propelled Lincoln to the political forefront and helped shape him into a presidential candidate—very few Lincoln manuscripts survive from this period.

In this undated speech fragment believed to be from that race, Lincoln stated his opposition to slavery as an inhumane practice while acknowledging the nation’s economic dependence on the institution. He also compared the ongoing struggle to end slavery in the United States to the successful abolition movement in Great Britain. He noted that Parliament had debated for nearly one hundred years over the same issues that American abolitionists faced, and he praised the efforts of English abolitionists: “School-boys know that Wilbe[r]force . . . helped the [abolitionist] cause forward; but who can now name a single man who labored to retard it?”

It’s clear from this speech that Lincoln felt the abolition of slavery would be a slow process and that he might not live to see its end in his lifetime. Considering this, he still proclaimed his unwavering belief that its end must come. Lincoln expressed pride at his then-modest involvement in fighting slavery; he did not yet know that he would be the driving force behind slavery’s ultimate extinction: “I am proud, in my passing speck of time, to contribute an humble mite to that glorious consummation, which my own poor eyes may not last to see.”

I have never professed an indifference to the honors of official station; and were I to do so now, I should only make myself ridiculous. Yet I have never failed – do not now fail – to remember that in the republican cause there is a higher aim than that of mere office – I have not allowed myself to forget that the abolition of the Slave-trade by Great Brittain [sic], was agitated a hundred years before it was a final success; that the measure had it’s open fire-eating opponents; it’s stealthy "don’t care" opponents; it’s dollars and cent opponents; it’s inferior race opponents; it’s negro equality opponents; and it’s religion and good order opponents; that all these opponents got offices, and their adversaries got none – But I have also remembered that [inserted: though] they blazed, like tallow-candles for a century, at last they flickered in the socket, died out, stank in the dark for a brief season, and were remembered no more, even by the smell – School-boys know that Wilbe[r]force, and Granville Sharpe, helped that cause forward; but who can now name a single man who labored to retard it? Remembering these things I can not but regard it as possible that the higher object of this contest may not be completely attained within the term of my [inserted: natural] life. But I can not doubt either that it will come in due time. Even in this view, I am proud, in my passing speck of time, to contribute an humble mite to that glorious consummation, which my own poor eyes may [struck: never] [inserted: not] last to see –

Read the document introduction, view the image, and read the transcript. Then apply your knowledge of American history in order to answer the questions that follow.