A Spotlight on a Primary Source by John MurrayLord Dunmore

In April 1775, John Murray, the Earl of Dunmore and Virginia’s royal governor, threatened to free slaves and reduce the capital, Williamsburg, to ashes if the colonists rebelled against British authority. In the months that followed, Dunmore’s position became increasingly desperate. His troop strength fell to just 300 men and, on June 8, fearful of being attacked, he abandoned the Governor’s Palace in Williamsburg for the safety of a British ship. 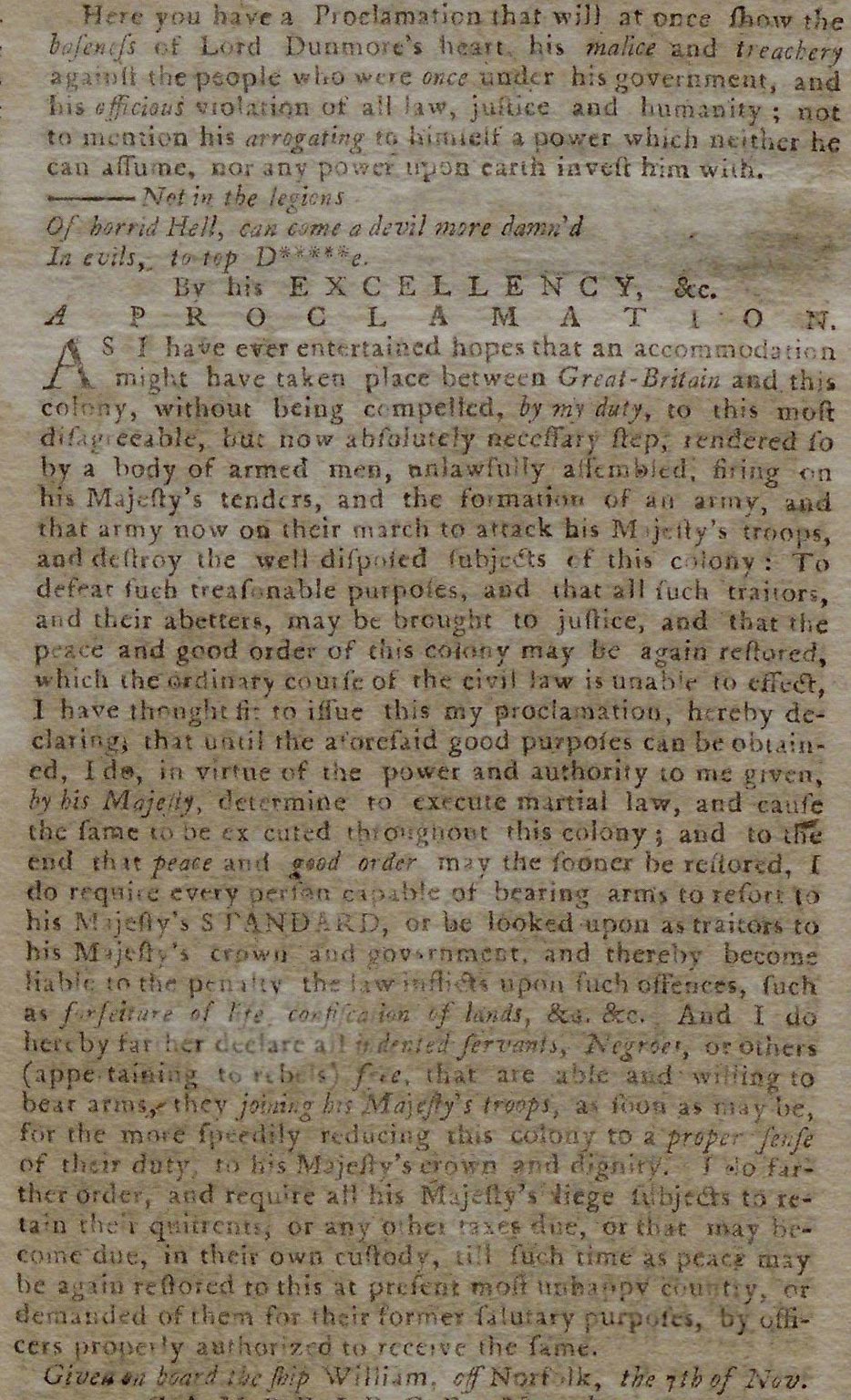 On November 7, 1775, Dunmore issued a proclamation that established martial law and offered freedom to slaves who would leave patriotic owners and join the British army: "I do hereby farther declare all indented servants, Negroes, or others (appertaining to rebels) free, that are able and willing to bear arms, they joining his Majesty’s troops, as soon as may be, for the more speedily reducing this colony to a proper sense of their duty, to his Majesty’s crown and dignity."

Within a month 300 black men had signed up with Dunmore’s "Royal Ethiopian Regiment." While the regiment grew to only 800 men, his proclamation inspired thousands of enslaved people to seek freedom behind British lines throughout the Revolutionary War.

Although Dunmore’s Proclamation applied only to Virginia, it was printed in newspapers throughout the thirteen colonies. This copy of the proclamation was published in the Pennsylvania Journal and Weekly Advertiser on December 6, 1775.

The American Revolution had a profound effect on the institution of slavery. It gave enslaved African Americans unprecedented opportunities to escape from slavery by serving in the British or Continental armies. Others took advantage of the chaos to run away and forge new lives elsewhere. When the American Revolution began, approximately 450,000 people were enslaved in the thirteen colonies. Some estimates claim that as many as 80,000 to 100,000 slaves throughout the thirteen states escaped to the British lines.

The PENNSYLVANIA JOURNAL; and the WEEKLY ADVERTISER

Here you have a Proclamation that will at once show the baseness of Lord Dunmore’s heart, his malice and treachery against the people who were once under his government, and his officious violation of all law, justice and humanity; not to mention his arrogating to himself a power which neither he can assume, nor any power upon earth invest him with.

Of horrid Hell, can come a devil more damn’d

By his EXCELLENCY, &c.

As I have ever entertained hopes that an accommodation might have taken place between Great-Britain and this colony, without being compelled, by my duty, to this most disagreeable, but now absolutely necessary step, rendered so by a body of armed men, unlawfully assembled, firing on his Majesty’s tenders, and the formation of an army, and that army now on their march to attack his Majesty’s troops, and destroy the well disposed subjects of this colony: To defeat such treasonable purposes, and that all such traitors, and their abetters, may be brought to justice, and that the peace and good order of this colony may be again restored, which the ordinary course of the civil law is unable to effect, I have thought fit to issue this my proclamation, hereby declaring, that until the aforesaid good purposes can be obtained, I do, in virtue of the power and authority to me given, by his Majesty, determine to execute martial law, and cause the same to be executed throughout this colony; and to the end that peace and good order may the sooner be restored, I do require every person capable of bearing arms to resort to his Majesty’s STANDARD, or be looked upon as traitors to his Majesty’s crown and government, and thereby become liable to the penalty the law inflicts upon such offences, such as forfeiture of life, confiscation of lands, &c. &c. And I do hereby farther declare all indented servants, Negroes, or others (appertaining to rebels) free, that are able and willing to bear arms, they joining his Majesty’s troops, as soon as may be, for the more speedily reducing this Colony to a proper sense of their duty, to his Majesty’s crown and dignity. I do father order, and require all his Majesty’s liege subjects to retain their quitrents, or any other taxes due, or that may become due, in their own custody, till such time as peace may be again restored to this at present most unhappy country, or demanded of them for their former salutary purposes, by officers properly authorized to receive the same.

Given on board the ship William, off Norfolk, the 7th of Nov.