A map of the Louisiana Territory, 1806

A Spotlight on a Primary Source by Meriwether Lewis 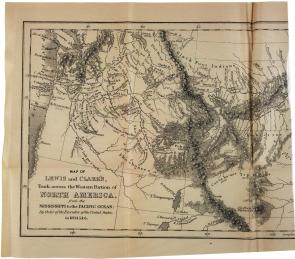 The 1803 Louisiana Purchase from France during Thomas Jefferson’s first term as president more than doubled the size of the United States. Jefferson’s next step was to learn all about this new territory of the United States. He chose Meriwether Lewis, a former army captain and his own private secretary, to lead the expedition. Lewis chose another army captain, William Clark, to join him and put together the team. Clark’s exceptional mapmaking skills proved invaluable, and he kept detailed records throughout the journey.

They left St. Louis, Missouri, in May 1804 and reached the Pacific Ocean near what would become Columbia, Oregon, in November 1805. Their primary tasks were to survey the new lands west of the Mississippi River and to locate a water route to the Pacific. They kept meticulous journals about plant and animal life, rocks and minerals, weather conditions, and a wide variety of other details about this new territory.

Another important goal was to initiate good relationships with the American Indians. During the winter, a French Canadian trader, Toussaint Charbonneau, and his wife, Sacagawea, a Shoshone Indian, joined the expedition. Sacagawea was instrumental in introducing Lewis and Clark to Native Americans. She acted as a translator and presented the expedition as peaceful.

The expedition returned to Missouri in September 1806 with valuable maps. After Lewis’s death in 1809, Clark took responsibility for organizing and releasing the expedition journals to eager scientists and curious Americans.

Read the document introduction and closely examine the enlarged document image in order to answer these questions. A current physical and political map of the United States will help students as well.