Supporters of women’s rights used maps such as the one shown here to demonstrate where women were allowed to vote, when they won that right, and which elections they could vote in. The source of this map is unknown. Originally printed around 1914, it was altered over a period of five years to reflect the ratification of the Nineteenth Amendment in various states through mid 1919. 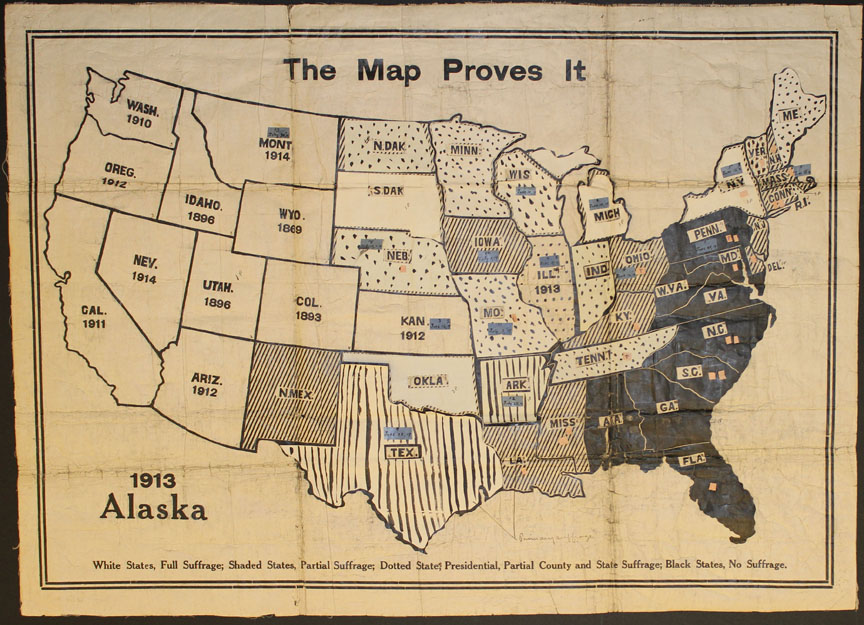 Each state is marked in patterns representing the status of women’s suffrage.

In several states, such as Arkansas, North Dakota, and Indiana, pieces of paper were marked by hand and added to the map to represent changes in suffrage.

This map has many customized markings added, including numbers in the corners of states, small pink squares, and “1P” and “2P” notations. We do not know what all the additions mean.

Small blue pieces of paper record the dates that women could first vote in a state or territory. They also record the order in which the states ratified the Nineteenth Amendment. Illinois first ratified the amendment on June 10, 1919, but because of a miswording in the bill’s introduction, the amendment was reaffirmed on June 17, 1919. The US secretary of state recognized Illinois as the first state to ratify the Nineteenth Amendment based on the first date.

As the map illustrates, women who lived in the western part of the United States could vote long before their eastern counterparts. Wyoming, Utah, Washington, Montana, and Alaska were all still territories when women obtained full suffrage.

The chart below incorporates information from the map and from historical records.

Ratification of the Nineteenth Amendment by State

Read the document introduction, view the image, and apply your knowledge of American history in order to answer the questions that follow.