Mary Todd Lincoln on life after the White House, 1870

A Spotlight on a Primary Source by Mary Todd Lincoln 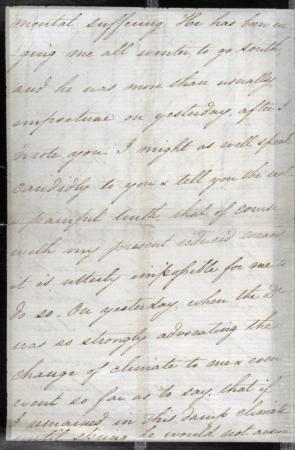 Mary Todd Lincoln’s years in the White House were a combination of triumph and tragedy. Never fully accepted by the public and vilified by the press for overspending, her tenure as First Lady was unstable at best. After the death of the Lincolns’ twelve-year-old son, Willie, in 1862, the assassination of President Lincoln shattered his wife’s already fragile state. To compound the matter, Mary was held personally liable for the debts she and the President had incurred for improvements to the White House. While battling for her widow’s pension, she traveled to Germany in 1868 for her health and to escape her many creditors. Left almost penniless and both mentally and physically ill in February 1870, she poured out her troubles and petitioned James Orne for money. Orne was a prominent Philadelphia Republican married to a good friend of Mary’s.

In this letter from Frankfurt am Main, written on mourning stationery on February 4, 1870, Mrs. Lincoln complained of an inflammation of the spine “brought on,” according to her doctor, “by great mental suffering.” She admitted her destitution: “I am not able to have a waiting woman & I suffer greatly often . . . With my small means, I can only lodge in second class boarding houses, the horror & humiliation of the situation to me, surpasses any thing you can imagine.” She called Lincoln “the Cruelly Martyred President” and lamented, “While all others have been so richly rewarded - the loved wife, of the man, who died in his country’s service has been left to shed the tears of bitterness & live in poverty - broken hearted.” She asked Orne to use his influence to settle her affairs so that she could improve her dire situation. Mrs. Lincoln finally received her pension later in 1870 and returned to America in 1871. She was briefly committed to an asylum and died in 1882.

When I wrote you on yesterday so hurriedly & nervously, I believe I did not explain to you, that I was sitting up for the first half hour, in ten days, having been prostrated by quite severe illness. I have been suffering very much this winter, by what my physician pronounces to be inflammation of the spine, brought on he says, by great mental suffering. . . . I am not able to have a waiting woman & I suffer greatly often, for the least attention. With my small means, I can only lodge in second class boarding houses, the horror & humiliation of the situation to me, surpasses any thing you can imagine. I had to suggest on yesterday to the Dr that traveling was very expensive, and his reply, kept me awake, most of the past night. In the most respectful & solemn manner he said, “Madam the whole of Germany, is watching with the greatest solicitude, to see the wife of the great & good man, rendered more comfortable & placed in the position, by her country, which of right belongs to her – as his widow” . . . I am going to speak very plainly with you. I want by the first of March – for fear the words of the physician, may be fearfully realized – that I will be unable to walk – to get away from here – to a milder climate & place myself in the hands of a Medical Man who can relieve my great bodily pain – All this, I cannot do without the money. . . . Through your great influence, cannot you have me by the 1st of March means to have my affairs here settled, & means given me even if a few thousand to go home. Whilst hundreds of thousands are so lavishingly bestowed upon others which pleases me greatly to see done, will not the remembrance that President Lincoln, was the head of all & cause something more to be done to ameliorate my most unfortunate condition. If I could be benefitted by the [illegible] mention Please write me on receipt of this – your candid views [are greatly appreciated.]

[written on top of page 3:] You will kindly consider this letter private save for the eyes of a few of your particular friends,