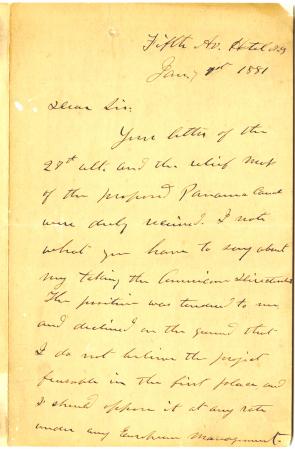 In his first address to Congress as President in 1869, Ulysses S. Grant called for the construction of a canal connecting the Pacific and Caribbean through the isthmus of Panama. Believing that such a canal would be a great boon to American commerce, Grant sent seven expeditions to survey and study the practicability of canal construction between 1870 and 1875. By the end of his presidency, however, Grant believed that the undertaking was not feasible.

In late 1880, Grant was contacted by Nathan Appleton, an American agent for the Panama Canal Company, a French effort to build a sea-level canal along the Panama Railroad led by Ferdinand de Lesseps. Appleton invited Grant, who had recently lost a bid for a third term as president, to be a part of the French project. Grant responded to Appleton with this letter declining the offer. "I do not believe the project feasible in the first place," wrote Grant, "and I should oppose it at any rate under any European management." Grant wrote that taking part in "the present scheme of a thorough cut, or sea level" canal would be equal to "advocating a swindle." Ultimately, Grant did not "believe the proposed plan practicable . . . to say nothing of the human lives that would be sacrificed in its construction"; he was right. In 1893, the French project was given up after nearly ten years of construction and the deaths of thousands of workers from disease. A successful, but equally deadly effort at building a canal through the isthmus of Panama would not come until 1904, when American construction began.

Your letter of the 27th ult. and the relief map of the proposed Panama Canal were duly received. I note what you have to say about my taking the American Directorship. The position was tendered to me, and declined on the ground that I do not believe the project feasible in the first place, and I should oppose it at any rate under any European management. My judgement is that every dollar invested in the Panama Canal, under the present scheme of a thorough cut, or sea level, will be sunk without any return to the investors, and without a canal to promote commercial interests.

If I was to advise the investment of money in the scheme I would feel that I was advocating a swindle equal to the "South Sea Bubble."

I do not accuse all the advocates—nor a very great number of them—of the de Lesseps scheme of insincerity or dishonesty, but I would be dishonest if I were to advocate it because I do not believe the proposed plan practicable with any amount of money that can be raised, nor that interest could be paid on it by all the commerce the canal could carry if built; to say nothing of the human lives that would be sacrificed in its construction.

Read the document introduction and transcript and apply your knowledge of American history in order to answer the questions that follow.