A proclamation on the suspension of habeas corpus, 1862 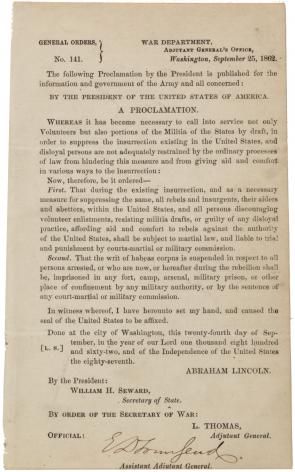 The doctrine of habeas corpus is the right of any person under arrest to appear in person before the court, to ensure that they have not been falsely accused. The US Constitution specifically protects this right in Article I, Section 9: "The privilege of the writ of habeas corpus shall not be suspended, unless when in cases of rebellion or invasion the public safety may require it." Lincoln initially suspended habeas corpus in the volatile border state of Maryland in 1861 in order to try large numbers of civilian rioters in military courts and to prevent the movement of Confederate troops on Washington. The order was eventually extended in response to different threats. In the summer of 1862, President Lincoln had called up the state militias, leading to increased opposition to the Civil War within the Union. By General Orders No. 141, September 25, 1862, Lincoln subjected protestors to martial law and the suspension of habeas corpus.

The suspension of habeas corpus was one of Lincoln’s most controversial decisions. In the spring of 1863, General Ambrose Burnside arrested Peace Democrat Clement Vallandigham, who had been critical of the US government, and banned publication of the Chicago Times, which was supportive of Vallandigham. Burnside’s actions drew widespread criticism, to which Lincoln responded by reducing Vallandigham’s sentence and revoking Burnside’s order suppressing the Times. Lincoln defended himself against charges that his administration had subverted the Constitution, however, arguing that acts that might be illegal in peace time might be necessary "in cases of rebellion," when the nation’s survival was at stake.

<p>Read the document introduction, examine the document, and apply your knowledge of American history in order to answer the following questions.</p>
<ol>
<li>Why did the Founders make certain to incorporate the right of habeas corpus as the sole liberty included in the original text of the US Constitution?</li>
<li>Make a chart with two columns. In one column list the stipulations in the Constitution under which habeas corpus may be suspended. In the second column list President Lincoln’s reasons for ordering the suspension of habeas corpus.</li>
<li>To what extent do Lincoln’s reasons satisfy the Constitutional provisions under which habeas corpus may be suspended?</li>
<li>Why is this historical event of particular interest to Americans today?</li>
</ol>
<h6>A printer-friendly version is available&nbsp;<a href="https://www.gilderlehrman.org/sites/default/files/inline-pdfs/06099_FPS…; title="here">here</a>.</h6>