A Spotlight on a Primary Source by the US Congress 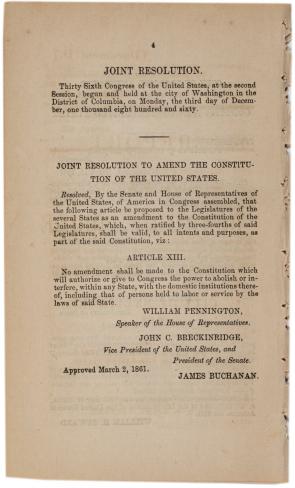 In the wake of the presidential election of 1860 that brought Abraham Lincoln to the White House, the slaveholding states of the American South, led by South Carolina, began withdrawing from the nation. In the midst of this constitutional crisis, President James Buchanan, still in office until Lincoln’s inauguration in March 1861, tried to reassure the South that their slave property would remain safe, even under the incoming Republican administration. He asked Congress to draw up what he called an "explanatory amendment" to the Constitution that would explicitly recognize the right of states to sanction human bondage and allow slaveholders to retain their human property. In response, the House of Representatives established a thirty-three member committee under the leadership of Representative Thomas Corwin of Ohio to prepare a draft for the President’s consideration.

Within weeks, the committee delivered the "Corwin Amendment" to the House, a document many hoped would mollify the South. This proposed Thirteenth Amendment reflected the apprehension of those who in late 1860 believed they were witnessing the dissolution of the nation. Without using the word "slavery" or "slave," the proposed amendment would deny "to Congress the power to abolish or interfere, within any State, with the domestic institutions thereof, including that of persons held to labor or service by the laws of said State." The amendment, officially designated Joint Resolution No. 80, passed the House of Representatives in late February by the convincing vote of more than two-thirds of the membership. It was delivered to the Senate just days before Lincoln’s inauguration and although most members of that body supported it, opponents were successful in blocking the amendment on a parliamentary technicality. Lincoln sent the amendment to the states for consideration. Only Ohio and Maryland ratified it. The copy of the amendment provided here is the one sent to Maryland for approval.

In 1865, at the end of the war, a very different constitutional amendment, bearing the same numerical designation, was proposed and finally passed; the ratified Thirteenth Amendment ended slavery throughout the United States.

A high resolution scan of the entire document is available here.

JOINT RESOLUTION TO AMEND THE CONSTITU-
TION OF THE UNITED STATES.

Resolved, By the Senate and House of Representatives of the United States, of America in Congress assembled, that the following article be proposed to the Legislatures of the several States as an amendment to the Constitution of the United States, which, when ratified by three-fourths of said Legislatures, shall be valid, to all intents and purposes, as part of the said Constitution, viz:

No amendment shall be made to the Constitution which will authorize or give to Congress the power to abolish or interfere, within any State, with the domestic institutions thereof, including that of persons held to labor or service by the laws of said State.

WILLIAM PENNINGTON,
Speaker of the Hous of Representatives.

Read the document introduction and text of the document and apply your knowledge of American history in order to answer the following questions.