A Spotlight on a Primary Source by Iowa General Assembly 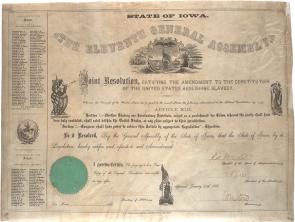 President Abraham Lincoln’s Emancipation Proclamation freed slaves only in Confederate states still at war with the Union on January 1, 1863, and as a wartime order, it could be reversed by subsequent presidential proclamation, congressional legislation, or court ruling. Through a constitutional amendment, the abolition of slavery could be made permanent throughout the United States.

In April 1864, the Senate, responding in part to an active abolitionist petition campaign, passed the Thirteenth Amendment to abolish slavery in the United States. Opposition from Democrats in the House of Representatives prevented the amendment from receiving the required two-thirds majority, and the bill failed.

Following his re-election in November 1864, Lincoln threw his weight behind the amendment. He persuaded eight House Democrats to switch their votes and encouraged several other Representatives who had missed the previous vote to support the amendment, which was finally passed on January 31, 1865. The Constitution does not require presidential signatures on amendments, but Lincoln added his, making it the only constitutional amendment to be later ratified that was signed by a president.

The Thirteenth Amendment was ratified on December 6, 1865, when Georgia became the twenty-seventh state to approve it out of the then-total thirty-six states. Iowa was the thirty-first state, voting for ratification on January 15, 1866. The document shown here is the joint resolution passed by Iowa’s House and Senate and printed on March 30. It lists the names of all the Iowa legislators in the general assembly who voted for ratification, and includes a few small engravings depicting allegorical symbols of liberty and other patriotic images.

With the ratification of the Thirteenth Amendment, four million African Americans—almost a third of the population of the South—became permanently free and slavery was abolished in the United States:

Section 1. Neither slavery nor involuntary servitude, except as a punishment for crime whereof the party shall have been duly convicted, shall exist within the United States, or any place subject to their jurisdiction.

Section 2. Congress shall have power to enforce this article by appropriate legislation.

A high-resolution scan is available here.

Read the document and apply your knowledge of American history in order to answer the following questions.