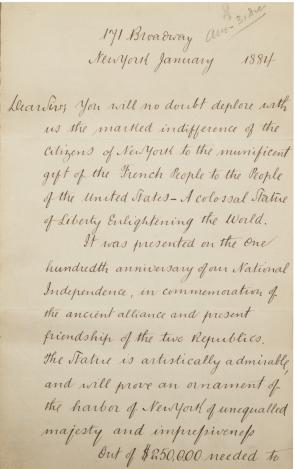 First conceived of in 1865, the Statue of Liberty was a gift from France commemorating the alliance between that country and the United States during the American Revolution as well as their mutual dedication to freedom and democracy. Though it was a gift from the people of France, the memorial was truly a collaboration between the two nations, with the French building the statue itself in France and the United States creating its pedestal on Bedloe’s Island (later Liberty Island), New York.

The building of the pedestal was a huge—and expensive—effort. Americans from all walks of life, from the urban impoverished to writers and artists to the President himself, helped raise funds for the pedestal. In this letter, written in January 1884, President Ulysses S. Grant requested a contribution toward the completion of the statue’s base from Tiffany and Company. Grant called the memorial a "commemoration of the ancient alliance and present friendship of the two Republics." Asking for a donation of $5,000, he wrote that "Out of $250,000 needed to erect a suitable pedestal less than half has been raised, after many and strenuous exertions." Expressing the urgency of meeting the costs of the pedestal, Grant wrote that if budget problems halted the project, "this neglect would produce the most unfavorable comments upon our patriotism and public spirit, not only in our own country, but throughout the civilized world."

Another American responsible for bringing the statue’s pedestal to completion was poet Emma Lazarus, one of the first successful Jewish American writers. Lazarus wrote "The New Colossus," a poem describing the reasons immigrants came to America and how America welcomed them. She donated the verse to an auction to raise funds to build the pedestal of the Statue of Liberty, and her words were eventually engraved on a bronze plaque at the base of the statue.

In 1886, the pedestal was finally finished, and on October 28, the completed Statue of Liberty was formally dedicated.

Dear Sirs;   You will no doubt deplore with us the marked indifference of the citizens of New York to the munificent gift of the French People to the People of the United States – A colossal Statue of Liberty Enlightening the World.

It was presented on the one hundredth anniversary of our National Independence, in commemoration of the ancient alliance and present friendship of the two Republics. The Statue is artistically admirable, and will prove an ornament of the harbor of New York of unequalled majesty and impressiveness

Out of $250,000 needed to [2] erect a suitable pedestal less than half has been raised, after many and strenuous exertions.

The threatened stoppage of work upon the Pedestal in consequence of this neglect would produce the most unfavorable comments upon our patriotism and public spirit, not only in our own country, but throughout the civilized world.

It has therefore been suggested that twenty of the most prominent of our citizens could be named who would gladly contribute to avert so discreditable a result, and your name has been presented as one of the twenty.

Will you be kind enough therefore to inform us if you will [3] agree to pay $5000 towards the object, provided the others do; any previous subscription to be counted as part of the sum, and no publication of the list to be made until it shall be completed.

We know that this is hardly a time to make an appeal for money, but the necessity is imperative.

"The New Colossus" by Emma Lazarus

Here at our sea-washed, sunset gates shall stand
A mighty woman with a torch, whose flame
Is the imprisoned lightning, and her name
Mother of Exiles. From her beacon-hand
Glows world-wide welcome; her mild eyes command
The air-bridged harbor that twin cities frame.
"Keep, ancient lands, your storied pomp!," cries she
With silent lips. "Give me your tired, your poor,
Your huddled masses yearning to breathe free,
The wretched refuse of your teeming shore.
Send these, the homeless, tempest-tost to me,
I lift my lamp beside the golden door!"

Read the document introduction and transcript and apply your knowledge of American history in order to answer the questions that follow.