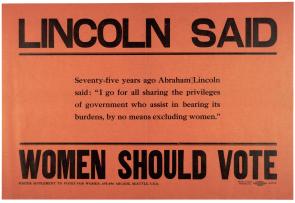 In 1910 Washington State voted to approve full woman suffrage, a vote that was influenced by publications and posters such as this one. This poster, declaring that "Lincoln said women should vote," invoked the words of Abraham Lincoln in an effort to link the memory of the assassinated president to the cause of woman suffrage. Published as a supplement to Votes for Women magazine, edited by suffragist Missouri T. B. Hanna in Seattle, the poster quotes Lincoln as having said, "I go for all sharing the privileges of government who assist in bearing its burdens, by no means excluding women."

The quote came from a letter Lincoln wrote while running for re-election to the Illinois general assembly in 1836. It was, however, an incomplete quotation. What Lincoln actually wrote was: "I go for all sharing the privileges of the government, who assist in bearing its burdens. Consequently I go for admitting all whites to the right of suffrage, who pay taxes or bear arms, (by no means excluding females.)"[1] The edited version that appeared on the Votes for Women poster removed the parentheses around Lincoln’s mention of women and also left out Lincoln’s assertion that suffrage should be for all "who pay taxes or bear arms."

While a cursory reading of Lincoln’s words could suggest support for woman suffrage, his statement may in fact have been what Lincoln biographer David Herbert Donald calls a "tongue-in-cheek joke."[2] Lincoln knew that most women could not pay taxes in Illinois (only widows who did not remarry could pay taxes in their own names) and that none could join the militia.

Lincoln was never known as an outspoken advocate of voting rights for women, and his 1836 letter was not meant to be a serious endorsement of widespread woman suffrage. Seventy-five years later, however, twentieth-century suffragists capitalized on Lincoln’s words, regardless of their intended meaning, to agitate for voting rights. The invocation of Lincoln’s memory, in concert with a wider campaign for suffrage, was successful in Washington State, and soon after women got the vote there, Votes for Women declared itself "the magazine that won equal suffrage in Washington."

Read the document introduction and image and apply your knowledge of American history in order to answer these questions.