A Spotlight on a Primary Source by Robert E. Lee 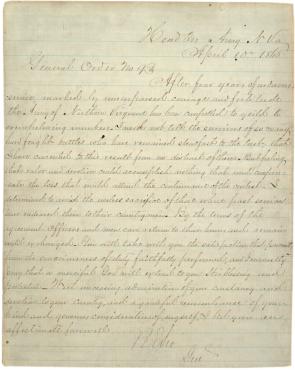 Left with no route of escape after the fall of Petersburg, Virginia, on April 2, 1865, Confederate General Robert E. Lee was faced with a difficult choice: keep fighting in an increasingly hopeless war or surrender to Ulysses S. Grant. At 4 a.m. on April 9, Major General Edward O. C. Ord, commander of the Army of the James, arrived with the XXIV Corps to support the Union forces and Lee’s fate was decided. Lee wrote to Grant and asked to meet to discuss terms of surrender. Throughout the morning, as communications concerning the surrender flew back and forth between Grant and Lee, their troops were still fighting at Appomattox Court House. Shortly before noon, Lee sent a message to Grant’s lines asking for a “suspension of hostilities pending the discussion of the Terms of surrender of this army.” It was received and recorded by General Ord, who wrote on it: “men at rest – firing stopped.” By the end of the day, Lee had accepted Grant’s terms for surrender.

The next day, Lee issued General Order No. 9, a farewell message to his troops. Explaining his decision to surrender, Lee—whose army was just 35,000 men compared to Grant’s total of 113,000—wrote that he was “compelled to yield to overwhelming numbers and resources” and that continuing combat would be a “useless sacrifice of those whose past services have endeared them to their Countrymen.” The war was essentially over, and Lee, having accepted that fate, praised his troops for their “duty faithfully performed,” bidding them “an affectionate farewell.”

A full transcript of Lee’s letter to Grant is available. 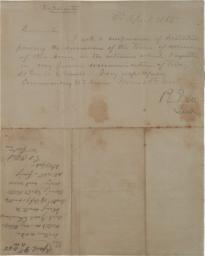 The
Within read –
acted on – my troops
and Genl Sheridans
being south &
west of Appomattox
covering Exits that
way. and men
at rest – firing
stopped –

A full transcript of General Order No. 9 is available.

After four years of arduous service, marked by unsurpassed courage and fortitude the Army of Northern Virginia has been compelled to yeild [sic] to overwhelming numbers. I need not tell the survivors of so many hard fought battles who have remained steadfast to the last, that I have consented to this result from no distrust of them. But feeling, that valor and devotion could accomplish nothing that would compensate the loss that would attend the continuance of the contest – I determined to avoid the useless sacrifice of those whose finest services have endeared them to their countrymen. By the terms of the agreement Officers and men can return to their homes and remain until exchanged. You will take with you the satisfaction that proceeds from the consciousness of duty faithfully performed, and I earnestly pray that a merciful God will extend to you His blessing and protection – With unceasing admiration of your constancy and devotion to your country, and a grateful remembrance of your kind and generous consideration of myself, I bid you an affectionate farewell.

Read the introduction and the transcripts and view the images. Then apply your knowledge of American history to answer the following questions: