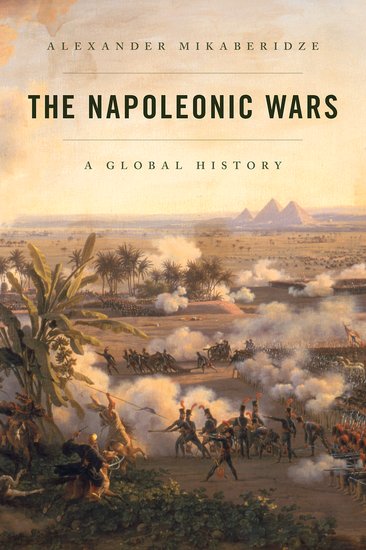 The Gilder Lehrman Institute of American History is pleased to announce that Alexander Mikaberidze has been awarded the eighth annual Gilder Lehrman Prize for Military History for The Napoleonic Wars: A Global History (Oxford University Press). The $50,000 prize is bestowed in recognition of the best book in the field of military history published in English during the previous calendar year.

A virtual program celebrating the winner and the shortlisted authors will take place on Thursday, November 4, hosted by the New-York Historical Society, the oldest museum in New York City. Tickets for the free program are available online.

“The judging panel were hugely impressed by the sheer range—in terms of geography, chronology, and sources—that Alexander brought to bear. He is equally at home explaining what was happening in Persia, India, and the Americas as in the cockpit of the European fighting,” said Professor Andrew Roberts, chair of the judging committee.

“I am immensely grateful to the jury members, the Gilder Lehrman Institute of American History and the New-York Historical Society for this immense honor,” said Alexander Mikaberidze. “This is the leading international award in the field of military history and being recognized by a jury of your peers is truly remarkable.”

Of his prize-winning book, Mikaberidze said, “Studying the vast body of scholarship dedicated to the Napoleonic era, I felt that the existing literature was too focused on events in Europe. The Napoleonic Wars had ramifications far beyond the European borders, so I decided to write a book showcasing the wider impact of this turbulent era. It took me a decade to complete it, but it was well worth it. My hope is that the readers will gain a better appreciation of the scope of the war that we can confidently call a ‘world war.’ Equally important, I think, is the broader lesson of breaking out of existing frameworks and casting a fresh look at existing historical narratives.”

Dr. Alexander Mikaberidze is professor of history and the Ruth Herring Noel Endowed Chair at Louisiana State University-Shreveport. He holds a degree in international law from Tbilisi State University (Georgia) and a PhD in history from Florida State University. After working for the Ministry of Foreign Affairs of Georgia (1996–2000), he taught European and Middle Eastern history at Florida State and Mississippi State Universities and lectured on strategy and policy for the US Naval War College. He currently serves as the curator of the James Smith Noel Collection, one of the largest rare book collections in North America. The Napoleonic Wars: A Global History has been awarded not only the 2020 Gilder Lehrman Military History Prize, but also the Society for Military History’s 2021 Distinguished Book Award in the non-US category.

Seventy-five books were submitted for consideration by publishers in the United States and the United Kingdom for the Gilder Lehrman Prize for Military History. The other finalists for this year’s prize are Richard B. Frank for Tower of Skulls: A History of the Asia-Pacific War: July 1937–1942 (W. W. Norton & Company), Donald F. Johnson for Occupied America: British Military Rule and the Experience of Revolution (University of Pennsylvania Press), Martin J. Sherwin for Gambling with Armageddon: Nuclear Roulette from Hiroshima to the Cuban Missile Crisis (Knopf Publishing Group), Daniel Todman for Britain’s War: A New World, 1942–1947 (Oxford University Press, USA), and Ian W. Toll for Twilight of the Gods: War in the Western Pacific, 1944–1945 (W. W. Norton & Company).

The judging panel for the prize was composed of Andrew Roberts, visiting professor at the War Studies Department of King’s College London, committee chair; Flora Fraser, author, chair of the Elizabeth Longford Prize for Historical Biography and founder of the Elizabeth Longford Grants for Historical Biography; Allen C. Guelzo, author, senior research scholar in the Council of the Humanities at Princeton University and director of the James Madison Program’s Initiative in Politics and Statesmanship; Ian Beckett, author, chairman of the Council of the Army Records Society, secretary to the Buckinghamshire Military Museum Trust, and professor of military history at the University of Kent; and Craig Symonds, the Distinguished Visiting Ernest J. King Professor of Maritime History at the US Naval War College.

The inaugural prize for 2013 was awarded to Allen Guelzo for Gettysburg: The Last Invasion (Knopf). Other recipients include Alexander Watson for Ring of Steel: Germany and Austria-Hungary in World War I, 1914–1918 (Basic), Peter Cozzens for The Earth Is Weeping: The Epic Story of the Indian Wars for the American West (Knopf), Cathal Nolan for The Allure of Battle: A History of How Wars Have Been Won and Lost (Oxford), Andrew Lambert for Seapower States: Maritime Culture, Continental Empires and the Conflict That Made the Modern World (Yale), and most recently, John C. McManus for Fire and Fortitude: The US Army in the Pacific War, 1941–1943 (Dutton Caliber).

The intent of the Gilder Lehrman Prize for Military History is to draw public attention to military history not only as an important staple of education in the areas of international relations, diplomacy, and conflict studies, but also as a subject in which any educated citizen should be interested. The study of the steps to war, conduct of military campaigns, and diplomatic responses to war can play an essential role in the quest for a more peaceable future.

Funding for the prize is provided by Lewis E. Lehrman, co-founder of the Gilder Lehrman Institute of American History, author, and champion of studies in American political and military history.