The Henry Knox Papers in the Gilder Lehrman Collection contain more than 10,000 documents dating from 1750 to 1820. The bulk of the archive chronicles the American Revolution and early founding era. The depth and complexity of the Knox Papers have made it a favorite with the curatorial staff. One particularly interesting document from this archive is the Knox family’s living expenses in New York and when Henry served as secretary of war under the Articles of Confederation. It includes all the budget basics that we have today: rent, taxes, transportation, clothes, heat, school cost, household goods, etc. It is an interesting snapshot of life in the late eighteenth century. We also see that Knox’s salary of £980 pounds was not enough to meet his expenses of £1304.16. In today’s currency, Knox earned £108,700 a year, but spent an average of £144,700. 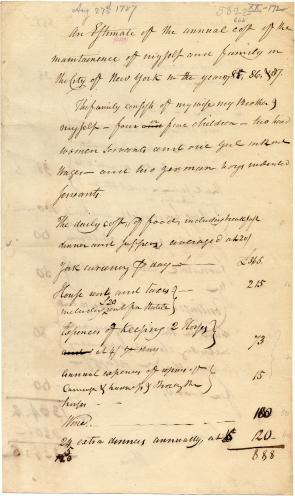 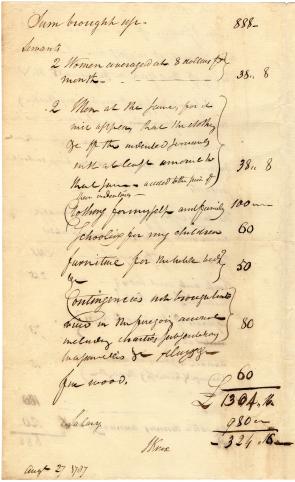 An Estimate of the annual cost of the maintainence of myself and family in the City of New York in the years 85, 86 & 87.

The family consists of my wife my Brother & myself – four or five children- two hired women servants and one girl without wages- and two german boys indented servants.