Sometimes documents leave us with more questions than answers. That is definitely true for this letter of October 8, 1859, from an unidentified man to his mother—both of whom appear to be slaves! 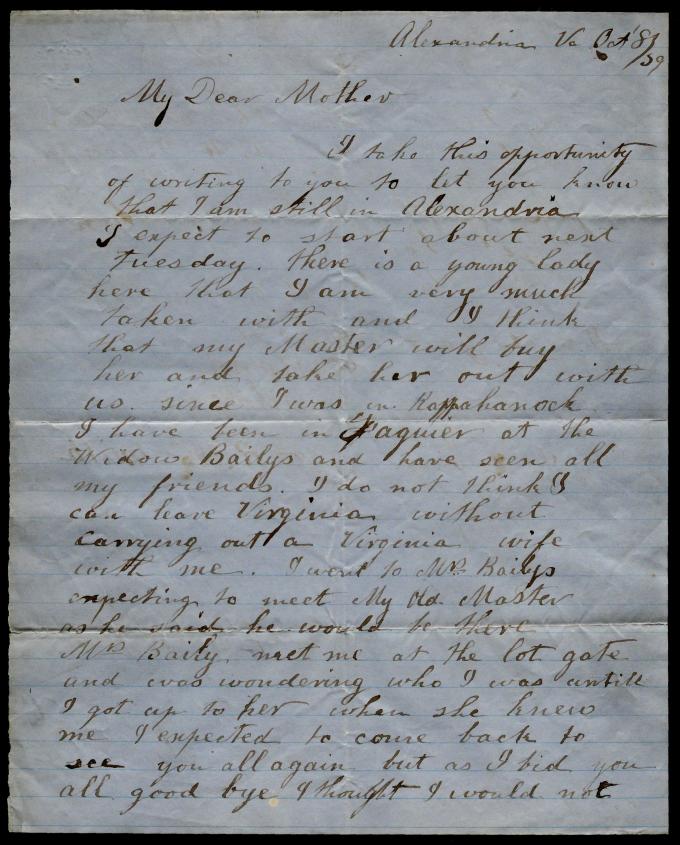 The author refers twice to having a master:

We really wanted to try to track this down, so we started by compiling a list of names and places mentioned in the letter:

The 1860 census indicates that a Robert W. Smith had a plantation with 74 slaves in Portland, Alabama. Genealogical records show that he had a brother, Francis Lee Smith, who lived in Alexandria, Virginia. Perhaps Robert Smith was visiting his brother and purchasing slaves for his plantation or had asked his brother to purchase slaves for him. We couldn’t track down Mrs. Baily, but there are a lot of Baileys in Fauquier, too many for us to pin down her identity. 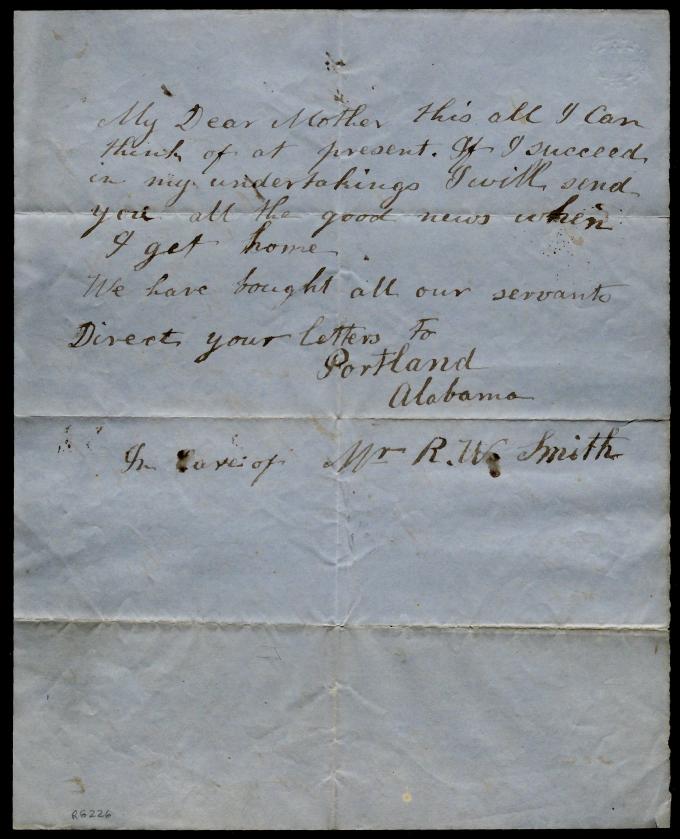 Another tantalizing clue—a note in the provenance file for this document—indicates that the letter was once in the papers of Colonel John A. Washington, George Washington’s great-grandnephew who inherited Washington’s home at Mount Vernon (near Alexandria) and Waveland (in Fauquier County). He sold Mount Vernon and 200 acres of property to the Mount Vernon Ladies Association in 1858–1859 but retained ownership of other Washington family property near Mount Vernon.

Did the sender of the letter write it himself? Would his mother have been able to read it herself? Educating slaves was illegal in Virginia and Alabama. Were they secretly taught to read and write? Were they highly trained and educated because of their duties? Or did someone write the letter for the author and would someone read it to his mother? Was the author owned by John A. Washington III? John Washington was "hiring out" slaves in 1859; perhaps Robert Smith was only a temporary "master." The tone of the letter is upbeat and positive, not exactly what one would expect from a slave moving or returning to the Deep South, where life in slavery was more difficult. Perhaps the author knew the letter might be read by slaveholders? And what about the last line: "If I succeed in my undertakings I will send you all the good news when I get home"?

Hopefully the answers are in an archive in Virginia or Alabama. It would be wonderful to be able to put a name to the author and his mother.

I take this opportunity of writing to you to let you know that I am still in Alexandria. I expect to start about next tuesday. there is a young lady here that I am very much taken with and I think that my Master will buy her and take her out with us. since I was in Rappahanock, I have been in Faquier at the Widow Bailys and have seen all my friends.  I do not think I can leave Virginia without carrying out a Virginia wife with me. I went to Mrs. Bailys expecting to meet My Old Master as he said he would be there.  Mrs. Baily met me at the lot gate and was wondering who I was untill I got up to her when she knew me. I expected to come back to see you all again but as I bid you all good bye I thought I would not

My Dear Mother this all I can think of at present. If I succeed in my undertakings I will send you all the good news when I get home.

We have bought all our servants.

Direct your letters to

In Care of Mr R.W. Smith