South Carolina Secedes from the Union: On This Day, December 20, 1860 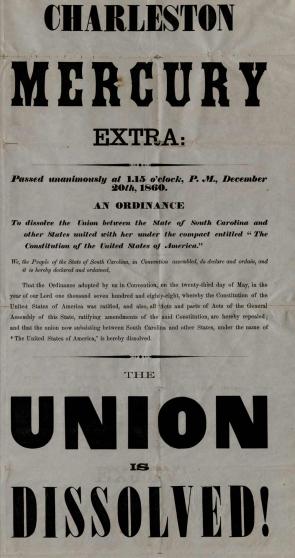 On December 20, 1860, South Carolina became the first Southern state to secede from the Union. Abraham Lincoln’s election in November 1860 set the wheels of secession in motion. Many Southerners were convinced that the new president and his Republican Party would take federal action against slavery.

This broadside, printed by the Charleston Mercury, announced that South Carolina, by unanimous vote, would repeal the US Constitution and that "the union now subsisting between South Carolina and other States, under the name of ‘The United States of America,’ is hereby dissolved."

Eventually, ten other states would follow South Carolina’s example and form the Confederacy. Read about the conflicts that culminated in secession and war, and view a talk by University of Richmond professor Edward L. Ayers on the bitter divide between neighbors that led to the Civil War.