Our Constitution: The Bill of Rights (Grades 7–9) 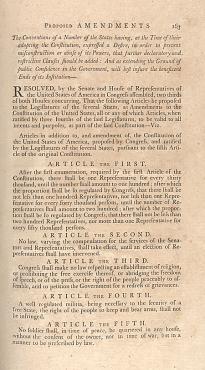 These lessons on the Bill of Rights are part of Gilder Lehrman’s series of Common Core–based units. These units were written to enable students to understand, summarize, and analyze original texts of historical significance. Students will demonstrate this knowledge by writing summaries of selections from the original document and, by the end of the unit, articulating their understanding of the complete document by answering questions in an argumentative writing style to fulfill the Common Core Standards. Through this step-by-step process, students will acquire the skills to analyze any primary or secondary source material.

Students will understand the rights and restrictions that are defined by the first five amendments of the Bill of Rights in the United States Constitution. They will demonstrate that understanding by restating those ideals in their own words.

On September 17, 1787, in the city of Philadelphia, 39 of the 55 delegates to the Constitutional Convention signed the newly negotiated United States Constitution. Many of those who did not sign refused to do so because the document did not include a “Bill of Rights” that would both secure basic civil rights for its citizens and define the limits of the federal government’s power. Much of the later state ratification debates raged over this lack of a Bill of Rights. In the solution known as the Massachusetts Compromise, four states agreed to ratify the document if their recommendations would be sent to Congress for consideration. Subsequently, Congress approved twelve of those amendments to the Constitution in 1789. Ten of these were ratified by the states and became the Bill of Rights. The responsibility for the interpretation of those amendments is given to the US Supreme Court.

In this unit the students will analyze the original text of these amendments through careful reading. They will study the exact language of the amendments in order to understand not only the intent of the Founding Fathers, but also the way these words have since been interpreted. This will be done as both individual and group work. Finally, in Lesson 3, the students will be able to experience how the Supreme Court operates by analyzing a mock case brought before the Court and then deciding the constitutional issues that the case presents. The students will then write either a minority or a majority opinion based on the textual evidence as presented in the case brief.

Note: You may choose to have the students do this lesson individually, as partners, or in small groups of no more than three or four students.

Students will understand the rights and restrictions that are defined by the second five amendments of the Bill of Rights in the United States Constitution. They will demonstrate that understanding by restating those ideals in their own words.

In this lesson the students will analyze the original text of amendments 6–10 just as they did amendments 1–5 in the last lesson, through careful reading. They will study the exact language of the amendments in order to understand not only the intent of the Founding Fathers but the way that these words have since been interpreted. At your discretion this will be done either individually, as partners, or in small groups of three or four students.

The judicial branch of our government consists of the Supreme Court and the lower federal courts. The judicial branch hears cases that challenge or require interpretation of the bills passed by Congress and signed into law by the President. The President nominates the judges and justices for the courts and the Senate either ratifies or rejects those nominees. If approved to serve by the Senate, the appointees to the federal bench serve for life or until they retire, resign, or are impeached. The average term for a justice in the Supreme Court is fifteen years. The longest serving justice was Justice Douglas who retired in 1975 after serving on the court for thirty-six years and six months. Although the Supreme Court has been in existence for over 200 years there have been only 112 justices in the Supreme Court as of 2012.

“Equal Justice Under Law” is the engraving written above the entrance to the Supreme Court Building in Washington, DC, and these words show the deep commitment that the Court has to the Rule of Law, democracy, and a constitutional republic. The Court is dedicated to maintaining a balance between society’s need for order and the individual’s right to freedom.

The Supreme Court has changed very little in the more than 200 years since it was created; although, now there are eight associate justices and one chief justice instead of five associates and a chief justice when the Court was created in 1790. The justices still wear black robes and quill pens are still placed on the counsel tables. And before every session of the Court the justices all shake hands in a tradition called "The Conference Handshake" that symbolizes that although they may not all agree on cases, they are united in their purpose to ensure the common good.

The chief justice and the other eight justices begin their session on the first Monday in October and hear cases until June or July. Approximately 10,000 civil and criminal cases are filed with the Court each year; of those, oral arguments are heard for seventy-five to eighty cases. The lawyers for each side in a case have thirty minutes to make their arguments. There is no jury, and no witnesses are summoned, although the Court has extensive background information about all of the previous decisions that have been made concerning the case being argued.

In addition, the Court can invalidate legislation from Congress and even overturn executive decisions made by the President when the Court feels that they conflict with the Constitution.

The judicial branch, and specifically the Supreme Court, is the “watch dog” of our government. It is responsible for making sure that the oldest written constitution still in force on Earth is not abused or misused by the other two branches of our government.

In this lesson the students will be working in groups in order to read, analyze, discuss, and write about a fictional Supreme Court case called Ricks v. Willaterra County. They will be drawing their own conclusions as to the constitutional issues, based on their study of the Bill of Rights, and then offering either a majority or minority opinion on the case.