John Adams on the abolition of slavery, 1801

A Spotlight on a Primary Source by John Adams 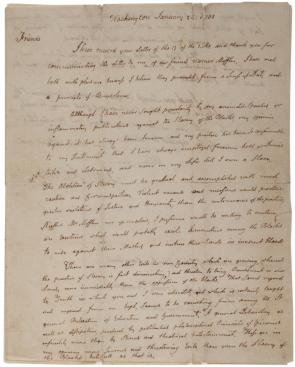 On January 24, 1801, President John Adams responded to two abolitionists who had sent him an anti-slavery pamphlet by Quaker reformer Warner Mifflin (1745–1798). In the letter, Adams expresses his views on slavery, the dangers posed by abolitionists (who at the time were mostly Quakers and unpopular religious radicals), and emancipation. Of slavery Adams writes, "my opinion against it has always been known," noting that he has "always employed freemen both as Domisticks and Labourers, and never in my Life did I own a Slave."

Adams, despite being opposed to slavery, did not support abolitionism except if it was done in a "gradual" way with "much caution and Circumspection." Adams dismisses radical abolitionist measures as "produc[ing] greater violations of Justice and Humanity, than the continuance of the practice" of slavery itself. Adams also wrongly asserts that "the practice of Slavery is fast diminishing." Rather than declining, slavery was growing in America. The 1790 census counted almost 700,000 slaves. According to the census of 1800, the year before Adams wrote this letter, that number had grown to almost 900,000.

In closing, Adams writes that he does "wish you Success in your benevolent Endeavors to relieve the distress of our fellow Creatures, and Shall always be ready to cooperate with you, as far as my means and Opportunities can reasonably be expected to extend."

Although I have never Sought popularity by any animated Speeches or inflammatory publications against the Slavery of the Blacks, my opinion against it has always been known and my practice has been so conformable to my sentiment that I have always employed freemen both as Domisticks and Labourers, and never in my Life did I own a Slave. The Abolition of Slavery must be gradual and accomplished with much caution and Circumspection. Violent means and measures would produce greater violations of Justice and Humanity, than the continuance of the practice. Neither Mr. Mifflin nor yourselves, I presume would be willing to venture on Exertions which would probably excite Insurrections among the Blacks to rise against their Masters and imbrue their hands in innocent blood.

There are many other Evils in our Country which are growing, (whereas the practice of slavery is fast diminishing,) and threaten to bring Punishment on our Land, more immediately than the oppression of the blacks. That Sacred regard to Truth in which you and I were educated, and which is certainly taught and enjoined from on high, Seems to be vanishing from among Us. A general Relaxation of Education and Government. A general Debauchery as well as dissipation, produced by pestilential philosophical Principles of Epicurus infinitely more than by Shews and theatrical Entertainment. These are in my opinion more serious and threatening Evils, than even the slavery of the Blacks, hateful as that is.

I might even add that I have been informed, that the condition, of the common Sort of White People in some of the Southern states particularly Virginia, is more oppressed, degraded and miserable than that of the Negroes.

These Vices and these Miseries deserve the serious and compassionate Consideration of Friends as well as the Slave Trade and the degraded State of the blacks.

Read the document introduction and transcript and apply your knowledge of American history to answer the following questions: