A Spotlight on a Primary Source by John Winthrop 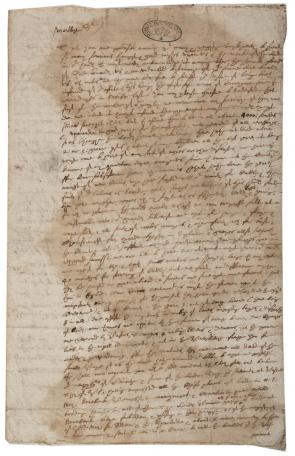 Between 1629 and 1640, 20,000 Puritans left England for America to escape religious persecution. They hoped to establish a church free from worldly corruption founded on voluntary agreement among congregants. This covenant theory governed Puritan social and theological life, including the annual elections in which all free men, or church members, could vote. As John Winthrop, the first governor of the Massachusetts Bay Colony, explained in his letter written on May 22, 1634: “Our civil Government is mixt: the freemen choose the magistrates every year . . . and at 4: courts in the year 3: out of each town (there being 8 in all) do assist the magistrates in making of laws, imposing taxes, & disposing of lands . . . Our Churches are governed by Pastors, Teachers ruling Elders & Deacons, yet the power lies in the whole Congregation.”

Writing in 1634 from Boston, less than four years after the city had been founded, Winthrop described a population of 4,000 settlers “well provided of all necessarys.” The American Indian population did not fare as well. Epidemic diseases introduced by European fishermen and fur traders reduced the population of New England’s coastal tribes by about 90 percent by the early 1620s. Their numbers continued to dwindle after Winthrop’s colony arrived in 1630, a development he took as a blessing: “For the natives, they are near all dead of the smallpox, so the Lord hath cleared our title to what we possess.” This sentence—the last in this letter mostly about the weather and crops—reveals a belief in divine providence that would shape relations with Native peoples for centuries to come.

An excerpt is available.

That you are pleased among yr many & weighty imployments to spend so many serious thoughts and good wishes upon us, & the work of the Lord in our hands, I must needs acknowledge it among other the special favours of God towards us, and an undoubted testimony of yr sincere Love towards us: which makes me the more careful to satisfy yr desire, of being truly informed of our estate (this being the first safe means of Conveyance since I received yrs in October last) you may please therefore to understand that first, for the number of our people, we never took any survey of them, nor do we intend it, except inforced through urgent occasion (David’s example sticks somewhat with us) [some Protestants interpreted the Bible as forbidding a census] but I esteem them to be in all about 4000 souls & upward: in good health (for the most parse) & well provided of all necessarys: so as (through the Lords special providence) there hath not died about 2: or 3: grown persons, & about so many Children all in the last year, it being verye rare to heare of any sick of agues or other diseases, nor have I known of any quartan Ague amonge us since I came into the Countrye. For Our susistence here, the means hitherto hath been the yearly access of new Comers, who have supplied all our wants, for Cattle, & the fruits of our labours, as board, pale, smiths work etc: if this should fail, then we have other meanes which may supply us, as fish viz: Cod, bass & herring, for which no place in the world exceeds us, if we can compass salt at a reasonable rate: our grounds likewise are apt for hemp & flax & rape seeds, & all sorts of roots, pumpkins & other fruits, which for taste & wholesomeness far exceed those in England: our grapes also (wherewith the Country abounds) afford a good hard wine. Our ploughs go on with good success, we are like to have 20 at work next year: our lands are aptest for Rye and oats. Our winters are sharp & longe, I may reckon 4 months for storing of cattle, but we find no difference whither they be housed or go abroad: our summers are somewhat more fervent in heat than in England. Our civil Government is mixt: the freemen choose the magistrates every year . . . and at 4: courts in the year 3: out of each town (there being 8 in all) do assist the magistrates in making of laws, imposing taxes, & disposing of lands: our furies [?] are chosen by the freemen of everye town. Our Churches are governed by Pastors, Teachers ruling Elders & Deacons, yet the power lies in the whole Congregation and not in the Presbytery [not in a larger council of churches] further than for order and precedence. For the natives, they are near all dead of the smallpox, so the Lord hath cleared our title to what we possess.

Read the document introduction and excerpt and apply your knowledge of American history in order to answer these questions.