The Doctrine of Discovery, 1493

A Spotlight on a Primary Source by Pope Alexander VI 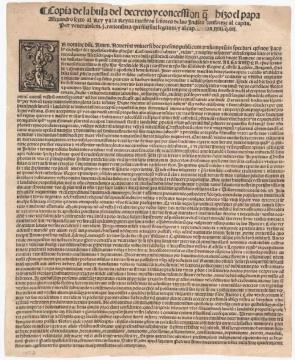 The Papal Bull "Inter Caetera," issued by Pope Alexander VI on May 4, 1493, played a central role in the Spanish conquest of the New World. The document supported Spain’s strategy to ensure its exclusive right to the lands discovered by Columbus the previous year. It established a demarcation line one hundred leagues west of the Azores and Cape Verde Islands and assigned Spain the exclusive right to acquire territorial possessions and to trade in all lands west of that line. All others were forbidden to approach the lands west of the line without special license from the rulers of Spain. This effectively gave Spain a monopoly on the lands in the New World.

The Bull stated that any land not inhabited by Christians was available to be "discovered," claimed, and exploited by Christian rulers and declared that "the Catholic faith and the Christian religion be exalted and be everywhere increased and spread, that the health of souls be cared for and that barbarous nations be overthrown and brought to the faith itself." This "Doctrine of Discovery" became the basis of all European claims in the Americas as well as the foundation for the United States’ western expansion. In the US Supreme Court in the 1823 case Johnson v. McIntosh, Chief Justice John Marshall’s opinion in the unanimous decision held "that the principle of discovery gave European nations an absolute right to New World lands." In essence, American Indians had only a right of occupancy, which could be abolished.

The Bull Inter Caetera made headlines again throughout the 1990s and in 2000, when many Catholics petitioned Pope John Paul II to formally revoke it and recognize the human rights of indigenous "non-Christian peoples."

An English translation is available.

Read the introduction and the document transcript in order to answer these questions.