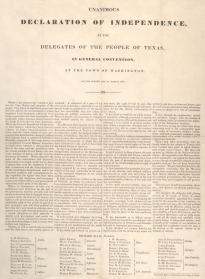 On March 2, 1836, Texas formally declared its independence from Mexico. The Texas Declaration of Independence was signed at Washington-on-the-Brazos, now commonly referred to as the “birthplace of Texas.” Similar to the United States Declaration of Independence, this document focused on the rights of citizens to “life” and “liberty” but with an emphasis on the “property of the citizen.”

The Texas Declaration of Independence was issued during a revolution against the Mexican government that began in October 1835 following a series of government edicts including the dissolution of state legislatures, disarmament of state militias, and abolition of the Constitution of 1824.

By December 1835, Texians (Anglo-American settlers) and Tejanos (Texans of mixed Mexican and Indian descent) captured the town of San Antonio. Two months later, on February 23, 1836, Mexican troops under General Antonio López de Santa Anna arrived in San Antonio to retake the city. Although Sam Houston ordered Texans to abandon San Antonio, a group of rebels decided to defend the town and make their stand at an abandoned Spanish mission, the Alamo.

For twelve days, Mexican forces laid siege to the Alamo. On March 6, four days after Texas declared independence, Mexican troops scaled the mission’s walls; 183 defenders were killed, including several Mexicans who had fought for Texas independence, and their oil-soaked bodies were set on fire outside the Alamo. The Republic of Texas won its independence on April 21, 1836, with a final battle along the San Jacinto River.

UNANIMOUS
DECLARATION OF INDEPENDENCE,
BY THE
DELEGATES OF THE PEOPLE OF TEXAS,
IN GENERAL CONVENTION,
AT THE TOWN OF WASHINGTON,
ON THE SECOND DAY OF MARCH, 1836

When a government has ceased to protect the lives, liberty, and property of the people, from whom its legitimate powers are derived, and for the advancement of whose happiness it was instituted; and so far from being a guarantee for their inestimable and inalienable rights, becomes an instrument in the hands of evil rulers for their oppression. When the Federal Republican Constitution of their country, which they have sworn to support, no longer has a substantial existence, and the whole nature of their government has been forcibly changed, without their consent, from a restricted Federative Republic, composed of Sovereign States, to a consolidated Central Military despotism, in which every interest is disregarded but that of the army and the priesthood, both the eternal enemies of civil liberty, the ever ready minions of power, and the usual instruments of tyrants. When, long after the spirit of the constitution has departed, moderation is at length so far lost by those in power, that even the semblance of freedom is removed, and the forms themselves of the constitution discontinued, and so far from their petitions and remonstrances being regarded, the agents who bear them are thrown into dungeons, and mercenary armies sent forth to force a new government upon them at the point of the bayonet.

When, in consequence of such acts of malfeasance and abduction on the part of the government, anarchy prevails and civil society is dissolved into its original elements, in such a crisis, the first law of nature, the right of self preservation, the inherent and inalienable right of the people to appeal to first principles, and take their political affairs into their own hands in extreme cases, enjoins it as a right towards themselves and a sacred obligation to their posterity to abolish such government, and create another in its stead, calculated to rescue them from impending dangers, and to secure their welfare and happiness.

Read the introduction and transcript and view the image. Then apply your knowledge of American history as well as the content of the document to answer the following questions: