A Spotlight on a Primary Source by Mathew Theobald 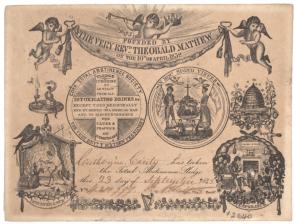 Mathew Theobald, a Catholic priest in Dublin, Ireland, founded the Cork Total Abstinence Society on April 10, 1838. About sixty followers joined Theobald in swearing off alcohol completely and signed his abstinence pledge book. Meetings of the Society were held each Friday and Saturday night and after Sunday Mass. The Society’s ranks quickly grew, and within three months, Theobald had enrolled 25,000 new members in Cork alone; in five months, the number had increased to 130,000. Theobald traveled across Ireland, convincing thousands more to pledge teetotalism. In August 1842, he began traveling internationally, first to Scotland, then England, and on to the United States in 1849.

In 1842, Father Mathew enrolled Catherine Cauty into the Cork Total Abstinence Society. This pledge card, signed by Theobald as president of the society, presents the pledge: "I promise to abstain from all intoxicating drinks, except used medicinally and by order of a medical man, and to discountenance the cause and practice of intemperance." An illustration on one side of the card depicts a scene warning of the dangers of intemperance—a man driven by alcohol to beat his wife. Another illustration shows a scene of temperance—a happy family reading together by the hearth. Cauty took and signed the pledge on September 23, 1842. Theobald’s success in promoting his cause is demonstrated by Cauty’s numbered pledge card—four years after the society’s founding, Cauty was number 4,281,797 to take the pledge in Ireland. In his travels abroad, Theobald convinced as many as seven million people, including 500,000 in America, to pledge total abstinence from alcohol by 1851.