A Spotlight on a Primary Source by State of Connecticut 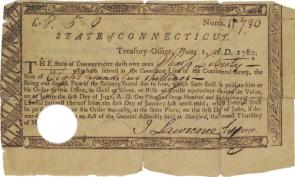 The cash-strapped government issued vouchers promising full payment by a certain date and paid interest until the full amount was collected. This voucher for eight pounds, five shillings, covers one-quarter of the full amount that Connecticut owed to Liberty in 1780. On the back, the state treasurer recorded the interest paid between 1781 and 1789. Sharp Liberty acknowledged each payment with his mark. The principal was probably paid soon after 1789, as indicated by the large, circular punch cancellation, evidence that the debt was cleared and the voucher was no longer valid for payment.

THE State of CONNECTICUT doth owe unto Sharp Liberty—who hath served in the Connecticut Line of the Continental Army, the Sum of Eight pounds five shillings—

Read the introduction, examine the document, and study the transcript. Then answer the following questions based on the document and your knowledge of American history.