A Spotlight on a Primary Source by John J. Pershing 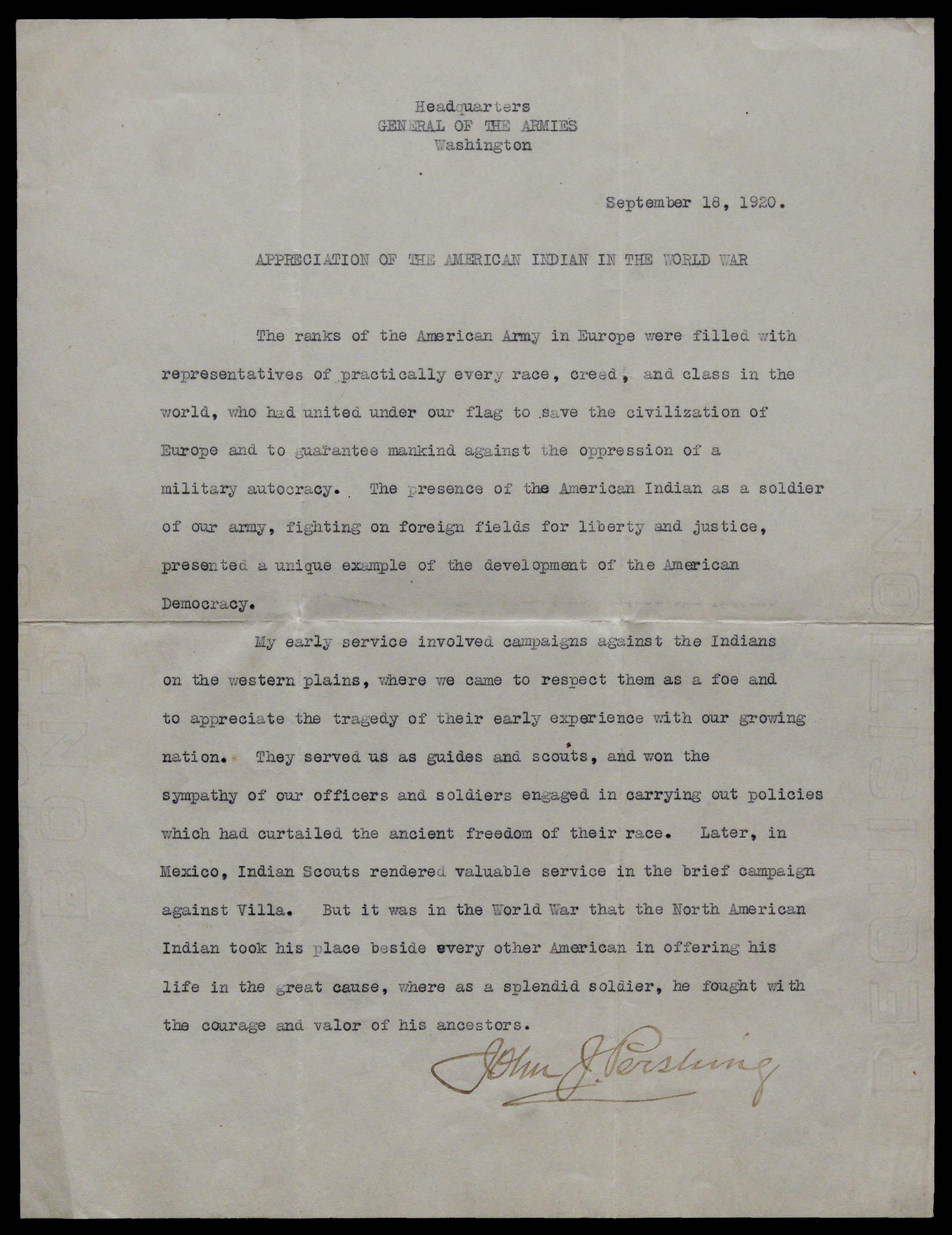 More than 11,000 American Indians served with the American forces during World War I. Nearly 5,000 Native men enlisted and approximately 6,500 were drafted—despite the fact that almost half of American Indians were not citizens and therefore not eligible for conscription. In all, approximately 25 percent of Native men served in the military.[1] They often volunteered to serve in dangerous roles, including as snipers and scouts. Unlike African American soldiers, Native Americans were not restricted to segregated regiments.

Joe High Elk, an American Indian soldier during the war, wrote about his experience saying, “While taking active part in the battle at Chateau Thierry latter part of July 1918 I was gassed and just barely escaped, this world war in which I took part is something that will be in my memory forever, I know I might get killed yet I know that I ought to do something for my country as we Indian’s are the real American’s. so I enlisted, and seen some hard times yet I am glad I have done my duty and I got back safely home, I cannot relate my whole experience there but do hope this be sufficient.”[2]

In order to keep US communications secret, Native American languages were often used for radio transmissions by the American forces. Members of the Choctaw and Cherokee Nations frequently developed special codes for these messages. They were the forerunners of the Code Talkers of World War II. At the same time, Native American children were punished for speaking their own languages in government schools.

After World War I, Joseph K. Dixon set out to document the experiences of American Indian veterans through photographs, questionnaires, and written testimony. He asked respondents to write “any Items of Interest connected to your War experience.” The responses varied widely. Some described their battle experience while others focused on more personal observations.

Dixon also contacted military leaders, including the commander of the American Expeditionary Forces, General John J. Pershing, for their views about Native American soldiers during the war. Pershing praised the American Indian soldiers in Europe, noting that “it was in the World War that the North American Indian took his place beside every other American in offering his life in the great cause, where . . . he fought with the courage and valor of his ancestors.”

Dixon planned to publish his documentation of these veterans as a way to advocate for Indian citizenship. However, Native American veterans were made citizens in 1919 and the Indian Citizenship Act of 1924 made all Native people citizens of the United States. Although Dixon’s book was never published, his documentation of the World War I service of more than 2,800 men is vital to the historical record.

The ranks of the American Army in Europe were filled with representatives of practically every race, creed, and class in the world, who had united under our flag to save the civilization of Europe and to guarantee mankind against the oppression of a military autocracy. The presence of the American Indian as a soldier of our army, fighting on foreign fields for liberty and justice, presented a unique example of the development of the American Democracy . . .it was in the World War that the North American Indian took his place beside every other American in offering his life in the great cause, where as a splendid soldier, he fought with the courage and valor of his ancestors.