An appeal for suffrage support, 1871 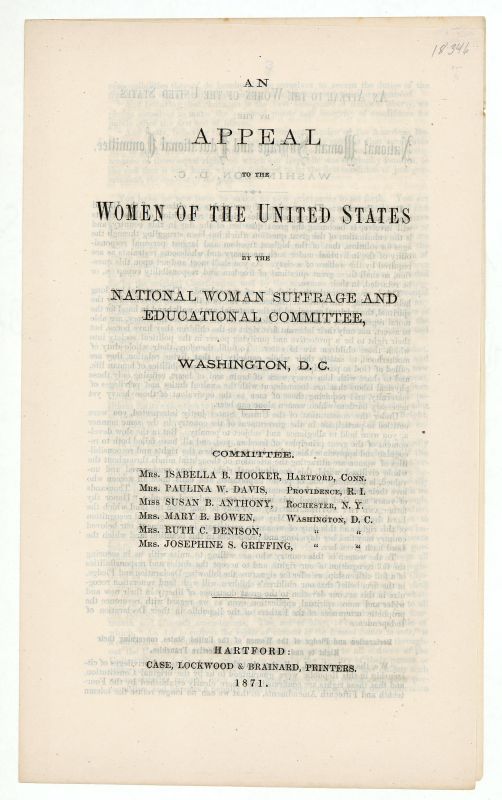 The National Woman Suffrage and Educational Committee was formed in the spring of 1871. The Washington DC-based committee pledged to act as the “centre of all action upon Congress and the country.” The group was also dedicated to the education of women on subjects affecting the United States’ welfare so that “women may become intelligent and thoughtful on such subjects, and the intelligent educators of the next generation of citizens.” This pamphlet, An Appeal to the Woman of the United States, written in 1871, urges women to demand equal rights for themselves and gives reasons why women should fight for their right to vote.

The committee, including President Isabella Beecher Hooker and Susan B. Anthony, reminds women of the grievances they face, including taxation without representation, a trial by those who are not their peers, and living under laws they had no voice in making. They refer to the Declaration of Independence in saying, “your rights to life, liberty and the pursuit of happiness are daily infringed, simply because you have heretofore been denied the use of the ballot, the one weapon of protection and defence under a republican form of government.”

The pamphlet concludes with a call for donations to support the continued publication of educational materials.

See the full transcripts for these documents in the PDF at the bottom of the page.

“We, the undersigned, believing that the sacred rights and privileges of citizenship in this Republic were guaranteed to us by the original Constitution, and that these rights are confirmed and more clearly established by the Fourteenth and Fifteenth Amendments, so that we can no longer refuse the solemn [3] responsibilities thereof, do hereby pledge ourselves to accept the duties of the franchise in our several States, so soon as all legal restrictions are removed.

“And believing that character is the best safe-guard of national liberty, we pledge ourselves to make the personal purity and integrity of candidates for public office the first test of fitness.

“And lastly, believing in God, as the Supreme Author of the American Declaration of Independence, we pledge ourselves in the spirit of that memorable Act, to work hand in hand with our fathers, husbands, and sons, for the maintenance of those equal rights on which our Republic was originally founded, to the end that it may have, what is declared to be the first condition of just government, the consent of the governed.”

Answer the following questions based on the introduction and excerpt, the transcript, and your knowledge of American history.