The Articles of Confederation, 1777

A Spotlight on a Primary Source by the Second Continental Congress 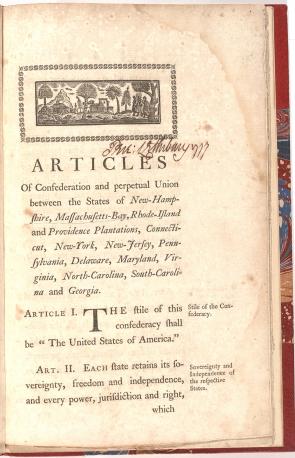 A day after appointing a committee to write the Declaration of Independence, the Second Continental Congress named another committee to write the Articles of Confederation. The members worked from June 1776 until November 1777, when they sent a draft to the states for ratification. On December 16, 1777, Virginia became the first state to ratify the Articles of Confederation. Maryland was the last, holding out until March 1, 1781.

More of a treaty—or a "firm league of friendship"—than a constitution, the Articles of Confederation in no way infringed upon the sovereignty of the original thirteen states. Each state held "its sovereignty, freedom, and independence, and every power, jurisdiction, and right, which is not by this confederation expressly delegated to the United States, in Congress assembled." The Congress, the primary organ of the new national government, only had the power to declare war, appoint military officers, sign treaties, make alliances, appoint foreign ambassadors, and manage relations with the American Indians. All states were represented equally in Congress, and nine of the thirteen states had to approve a bill before it became law. Amendments required the approval of all the states.

The Articles of Confederation represented an attempt to balance the sovereignty of the states with an effective national government. Under the Articles, the states, not Congress, had the power to tax. Congress could raise money only by asking the states for funds, borrowing from foreign governments, and selling western lands. In addition, Congress could not draft soldiers or regulate trade. There was no provision for national courts or a chief executive.

Importantly, the Articles did not establish a genuinely republican government. Power was concentrated in a single assembly, rather than being divided, as in the state governments, into separate houses and branches. Further, members of the Confederation Congress were selected by state governments, not by the people.

The Articles served as the nation’s plan of government until the US Constitution was ratified in 1788.

ARTICLE 1.
The Stile of this confederacy shall be "The United States of America".

ART. II.
Each state retains its sovereignty, freedom, and independence, and every power, jurisdiction, and right, which is not by this confederation expressly delegated to the United States, in Congress assembled.

ART. III.
The said states hereby severally enter into a firm league of friendship with each other, for their common defense, the security of their liberties, and their mutual and general welfare, binding themselves to assist each other, against all force offered to, or attacks made upon them, or any of them, on account of religion, sovereignty, trade, or any other pretense whatever.

ART. IV.
The better to secure and perpetuate mutual friendship and intercourse among the people of the different states in this union, the free inhabitants of each of these states, paupers, vagabonds, and fugitives from justice excepted, shall be entitled to all privileges and immunities of free citizens in the several states; and the people of each state shall have free ingress and regress to and from any other state, and shall enjoy therein all the privileges of trade and commerce, subject to the same duties, impositions, and restrictions as the inhabitants thereof respectively, provided that such restrictions shall not extend so far as to prevent the removal of property imported into any state, to any other state, of which the owner is an inhabitant; provided also that no imposition, duties or restriction shall be laid by any state, on the property of the united states, or either of them.

If any person guilty of, or charged with, treason, felony, or other high misdemeanor in any state, shall flee from justice, and be found in any of the united states, he shall, upon demand of the Governor or executive power of the state from which he fled, be delivered up and removed to the state having jurisdiction of his offense.

Full faith and credit shall be given in each of these states to the records, acts, and judicial proceedings of the courts and magistrates of every other state.

ART. V.
For the more convenient management of the general interests of the united states, delegates shall be annually appointed in such manner as the legislature of each state shall direct, to meet in congress on the first Monday in November, in every year, with a power reserved to each state to recall its delegates, or any of them, at any time within the year, and to send others in their stead, for the remainder of the year. . . .

In determining questions in the united states in congress assembled, each state shall have one vote.

Freedom of speech and debate in congress shall not be impeached or questioned in any court or place out of congress, and the members of congress shall be protected in their persons from arrests or imprisonments, during the time of their going to and from, and attendence on congress, except for treason, felony, or breach of the peace. . . .

Read the introduction and the document and apply your knowledge of American history in order to answer the following questions.