As part of the effort to secure land close enough to Japan to launch attacks against the mainland, the US Army and Navy began bombing the Bonin Islands of Iwo Jima, Hajajima, and Chichijima, in June 1944. Army and Navy bombers hit Iwo Jima for over eight months, culminating in seventy-four straight days of continuous airstrikes. Thirty-three of Lieutenant Bob Stone’s forty bombing missions were flown in the Iwo Jima campaign.

The amphibious assault on the island began on February 19 and continued for 36 days. The United States suffered casualties of more than 6,800 dead and 20,000 wounded. Of the 20,000 Japanese soldiers defending Iwo Jima, only 1,083 survived.

For the Stone family, Iwo Jima must have been particularly nerve-wracking. Four of the five Stone sons were involved in the invasion, including Bob and his stepbrother Barry Marks. Barry, a Marine, was stationed on Guam at a base near Bob’s. The brothers were able to visit each other frequently and share family news.

Almost a month after the invasion of Iwo Jima began, Bob informed his parents that Barry was part of the invasion. 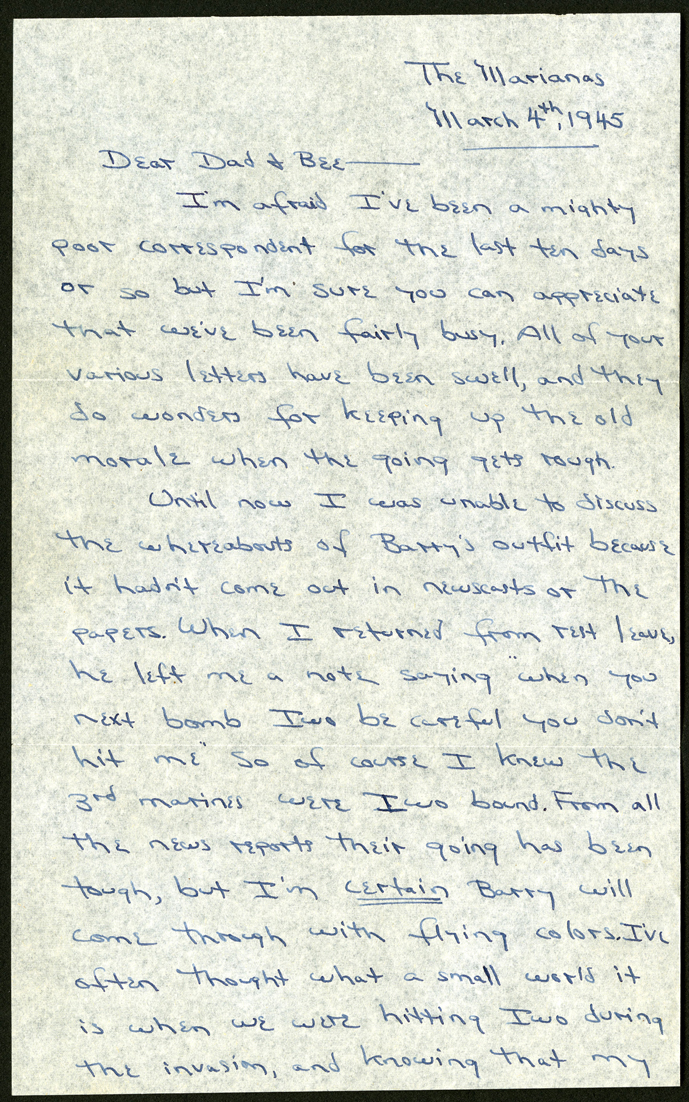 Excerpt from a letter from Robert L. Stone to Jacob Stone and Beatrice Stone, March 4, 1945

Until now I was unable to discuss the whereabouts of Barry’s outfit because it hadn’t come out in the newscasts or the papers. When I returned from rest leave, [on February 9th], he left me a note saying “when you next bomb Iwo be careful you don’t hit me” so of course I knew the 3rd marines were Iwo bound. From all the news reports their going has been tough, but I’m certain Barry will come through with flying colors. I’ve often thought what a small world it is when we were hitting Iwo during the invasion, and knowing that my brother was down on the beaches. If I get any word about his outfit, I’ll write as soon as censorship regulations permit. Ordinarily you’ve got to wait until it’s been related on the radio or in the papers, however.

While the letters that Jacob and Bee Stone wrote to their son no longer exist, Bob’s letter of March 17, 1945, indicates the anxiety they must have felt. In this passage, Bob acknowledges how difficult the war must be on loved ones at home. 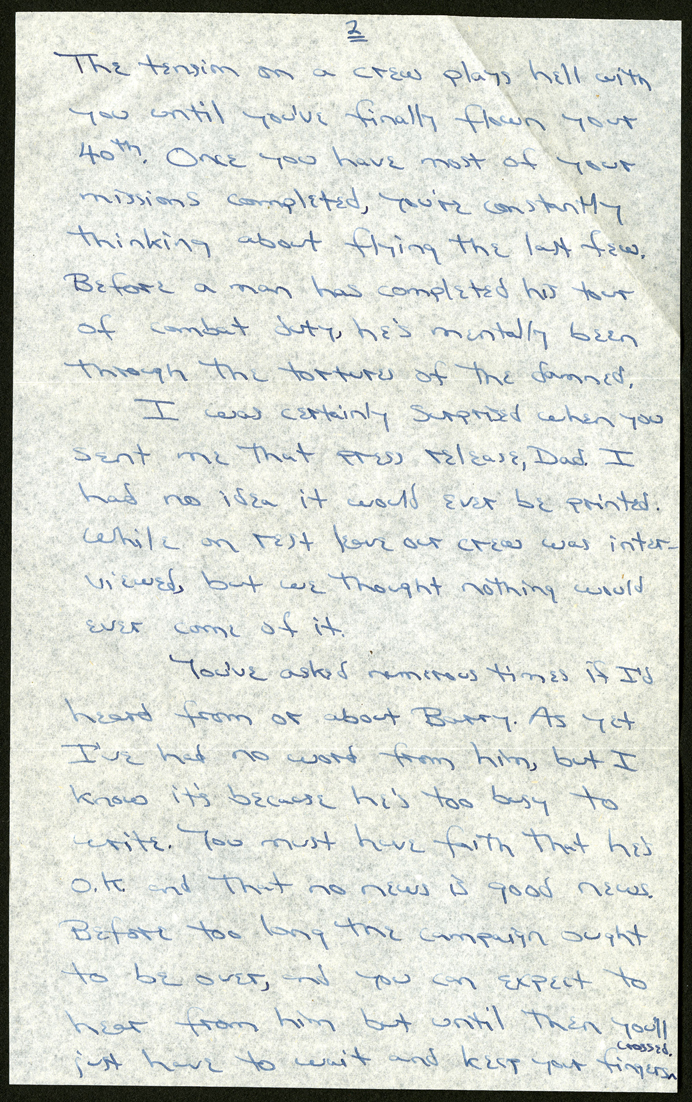 Excerpt from letter from Robert L. Stone to Jacob Stone and Beatrice March 17, 1945

You’ve asked numerous times if I’d heard from or about Barry. As yet I’ve had no word from him, but I know it’s because he’s too busy to write. You must have faith that he’s O.K. and that no news is good news. Before too long the campaign ought to be over, and you can expect to hear from him but until then you’ll just have to wait and keep your fingers crossed. As soon as I have any word of him or his outfit, I’ll of course let you know, providing it is within censorship regulations. I know that a war of waiting and hoping must be hell on you with five sons all scattered around the globe, but so far God has been kind and you’ve handled yourselves beautifully. We’ve all been through alot, but I guess it’s been no tougher than for you who are at home. I’ve been through a number of close calls when at the time there seemed to be no chance, but somehow everything worked out for the best.

Barry survived Iwo Jima and returned to the United States shortly after the invasion.