A Spotlight on a Primary Source by C. Herbert Oliver

On the morning of September 15, 1963, Denise McNair (age 11), Addie Mae Collins (age 14), Cynthia Wesley (age 14), and Carole Robertson (age 14) were killed when nineteen sticks of dynamite exploded at the Sixteenth Street Baptist Church in Birmingham, Alabama. Fourteen others were injured in the bombing. 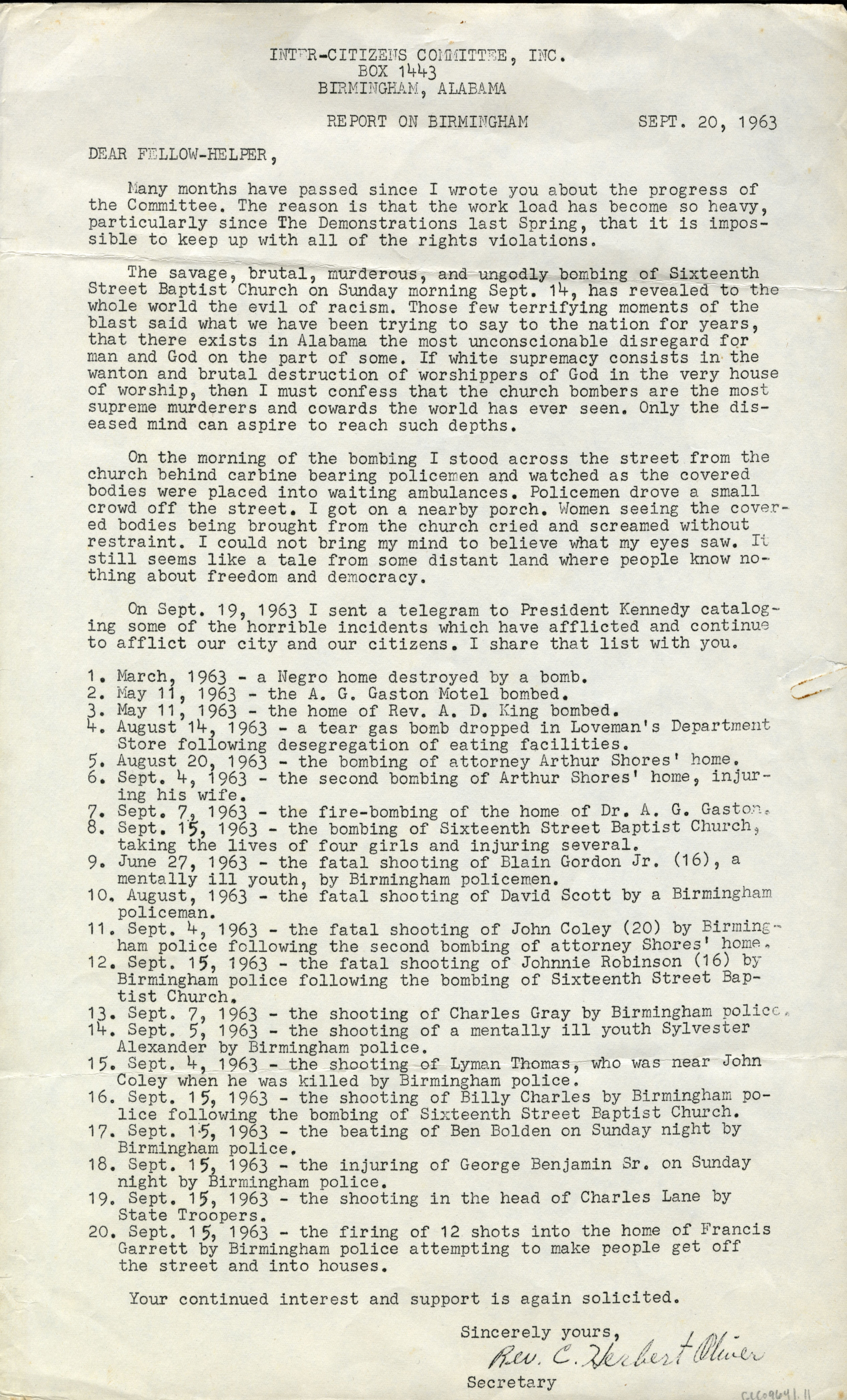 Just five days after the bombing of the church, the Reverend C. Herbert Oliver wrote a “Report on Birmingham,” making an appeal on behalf of the Inter-Citizens Committee to prospective supporters and documenting the violence that was consuming the city. The Inter-Citizens Committee was formed in April 1960 at Trinity Baptist Church in Birmingham by Oliver, Harold D. Long, G. L. Terrell, James Lowell Ware, and J. C. Wilson, all local ministers. The committee documented “cases of alleged rights violations, both official and non-official” from 1960 to 1965, sending their accounts, mainly by mail, to press and government representatives nationwide.

In his report, Oliver catalogs seven other bombings and twelve instances of police brutality against African Americans in Birmingham from March to September 1963. Six of the twenty attacks he lists in this six-month period occurred in the wake of the bombing of the Sixteenth Street Baptist Church. In his words, “The savage, brutal, murderous, and ungodly bombing of Sixteenth Street Baptist Church . . . has revealed to the whole world the evil of racism. Those few terrifying moments of the blast said what we have been trying to say to the nation for years, that there exists in Alabama the most unconscionable disregard for man and God on the part of some.”

A witness in the subsequent trial claimed that Robert Edward Chambliss, a member of the Ku Klux Klan, placed the bomb in the church. However, on October 8, 1963, Chambliss was found not guilty of murder and given a $100 fine for being in possession of 122 sticks of dynamite without a permit. When the case was reopened in 1977, Chambliss’s niece testified against him, and he was convicted of murdering the girls.

A 1965 memorandum from J. Edgar Hoover identified the bombers as Robert Chambliss, Bobby Frank Cherry, Thomas Edwin Blanton, and Frank Herman Cash. This evidence remained hidden until 1997. Blanton was convicted in 2001, and Cherry in 2002. Cash died before he could be prosecuted.

A full transcript is available

On the morning of the bombing I stood across the street from the church behind carbine bearing policemen and watched as the covered bodies were placed into waiting ambulances. Policemen drove a small crowd off the street. I got on a nearby porch. Women seeing the covered bodies being brought from the church cried and screamed without restraint. I could not bring my mind to believe what my eyes saw. It still seems like a tale from some distant land where people know nothing about freedom and democracy.

On September 11, 2018, Reverend Oliver visited the Gilder Lehrman Collection and spoke with Curators Sandra Trenholm and Allison Kraft, and high school students from a Gilder Lehrman Affiliate School about the bombing, its aftermath, and his response.