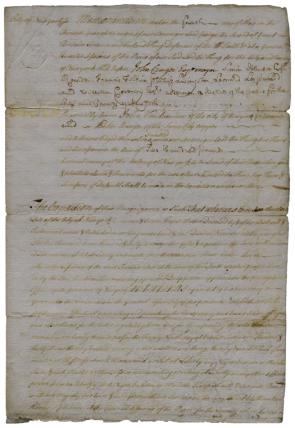 In 1757, New York tavern keeper Eve Scurlock freed five slaves in her will, citing their fidelity, service, and good behavior. Among them was a woman named Ann, to whom Scurlock also willed money, clothing, and household items. Though Scurlock’s will provided for Ann’s and the other slaves’ freedom, a slaveholder’s willed manumission did not guarantee a slave’s freedom. In New York, a 1730 "Act for the [more] Effectual preventing and punishing the Conspiracy and Insurrection of Negroes and other slaves" required freed slaves to post a bond to the government to guarantee that they would not participate in slave uprisings and that they would not become a burden on the city where they lived.

Although the New York bond was a hefty amount for a slave to come up with—at least £200—many states had even harsher manumission laws. In South Carolina, slaves freed by will or by deed were required to leave the colony within six months of their manumission or face re-enslavement. Virginia legislated that no slave could be freed under any circumstances whatsoever, and a 1752 Maryland law prohibited slaveholders from freeing slaves in a last will and testament.

This legal document records the manumission bond for Scurlock’s slave, Ann. The £200 bond was paid by two of Scurlock’s relatives—her nephew John Vanduersen, a cordswain, and her brother Peter Burger, a cooper. Among the witnesses to the bond was Philip Livingston, a New York City alderman who would later serve as a delegate to the Continental Congress and sign the Declaration of Independence.

Whereas Eve Scurloch, Late of the City of New York [Victualer] & Tavern keeper Widow Deceased by & of her Last will & testament made & Published in writing under bond & seal dated in November in the year of Our Lord one thousand seven hundred and fifty – among other gifts and requests in the same will mentioned did manumit set at Liberty and made free a woman Slave called Ann . . . AND WHEREAS by an act of his Excellency the Governor the Coucil and the General Assembly of this province entitled an Act for the [more] Effectual preventing and punishing the Conspiracy and Insurrection of Negroes and other slaves, for the better regulating them and for the repealing the acts therein mentioned relating thereto passed the Twenty Ninth day of October Seventeen hundred & Thirty it was thereby Enacted among other matters and things thereby Enacted that if any master of Mistress should Manumit or Set at Liberty any Negro Indian or Mulatto slave, & such Master or Mistress so manumitting or seting at liberty or any other sufficient person for or on behalf of such Ngreo Indian or Mulatto slave should enter into Bond unto his Majesty his heirs & successors with two sureties in the sum of not less than two Hundred pounds at the general sessions of the Peace for the County where such Negro Indian or Mulatto slave should Live or Reside to and save such Negro Indian or Mulatto slave from becoming or being any Charge to the City, town, parish, or place within this Colony where he she or they should at any time after such Manumission live.

Read the introduction and the transcript and examine the document image in order to answer the following questions.