A Spotlight on a Primary Source by Cotton Mather 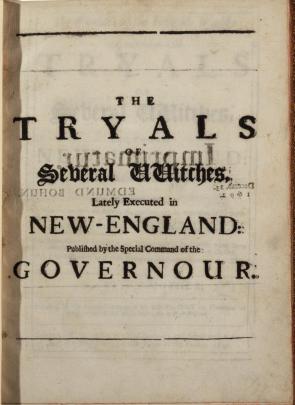 Most Americans’ knowledge of the seventeenth century comes from heavily mythologized events: the first Thanksgiving at Plymouth, Pocahontas purportedly saving Captain John Smith from execution in early Virginia, and the Salem witch trials of 1692. The myths surrounding what happened in Salem make the true story that much more difficult to uncover. Arthur Miller’s play The Crucible, which forms the basis of many Americans’ knowledge of the trials, takes liberties with the story. Miller transforms Tituba, a young Native American girl, into an African slave who led a group of young women into the forest to participate in magic rites. He also portrays the accusers as teenagers when many were in fact much younger.

Cotton Mather, a prolific author and well-known preacher, wrote this account in 1693, a year after the trials ended. Mather and his fellow New Englanders believed that God directly intervened in the establishment of the colonies and that the New World was formerly the Devil’s territory. Cotton Mather’s account of the witch trials reinforced colonial New Englanders’ view of themselves as a chosen generation of men.

The Salem witch scare had complex social roots beyond the community’s religious convictions. It drew upon preexisting rivalries and disputes within the rapidly growing Massachusetts port town: between urban and rural residents; between wealthier commercial merchants and subsistence-oriented farmers; between Congregationalists and other religious denominations—Anglicans, Baptists, and Quakers; and between American Indians and Englishmen on the frontier. The witch trials offer a window into the anxieties and social tensions that accompanied New England’s increasing integration into the Atlantic economy.

Wherefore The devil is now making one Attempt more upon us; an Attempt more Difficult, more Surprizing, more snarl’d with unintelligible Circumstances than any that we have hitherto Encountered; an Attempt so Critical, that if we get well through, we shall soon Enjoy Halcyon Days, with all the Vultures of Hell Trodden under our Feet. He has wanted his Incarnate Legions to Persecute us, as the People of God have in the other Hemisphere been Persecuted: he has therefore drawn forth his more spiritual ones to make an attacque upon us. We have been advised by some Credible Christians yet alive, that a Malefactor, accused of Witchcraft as well as Murder, and Executed in this place more than Forty Years ago, did then give Notice of, An Horrible PLOT & against the Country by WITCHCRAFT, and a Foundation of WITCHCRAFT then laid, which if it were not seasonably discovered, would probably Blow up, and pull down all the Churches in the Country.  And we have now with Horror seen the Discovery of such a WITCHCRAFT!

*** Beyond Arthur Miller’s The Crucible, numerous dramatic presentations offer insights into irrational human fear. For example, “The Monsters Are Due on Maple Street,” an episode of Rod Serling’s Twilight Zone series, may provide students and teachers an opportunity to examine the phenomenon of mass hysteria.