A Spotlight on a Primary Source by Continental Congress 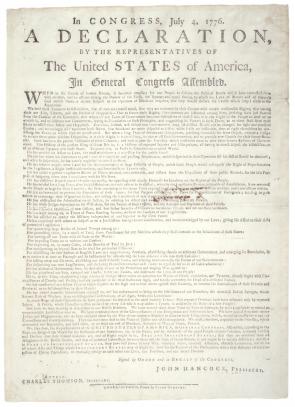 During the spring of 1776, colonies, localities, and groups of ordinary Americans—including New York mechanics, Pennsylvania militiamen, and South Carolina grand juries—adopted resolutions endorsing independence. These resolutions encouraged the Continental Congress to appoint a five-member committee to draft a formal declaration of independence. Thomas Jefferson wrote the initial draft of this document, which was then edited by other members of the committee and by Congress as a whole.

The most radical idea advanced by the American revolutionaries was the proposition set forth in the Declaration of Independence that "all men are created equal, that they are endowed by their Creator with certain unalienable Rights, that among these are Life, Liberty, and the pursuit of Happiness."

In 1776, Peter Timothy of Charleston printed this copy of the Declaration of Independence and brought the news of independence to South Carolina. In doing so, he risked his life. The son of French Huguenots who arrived in 1731, Timothy inherited the press after the death of his father. In 1738, he became publisher of the Gazette of South Carolina.

Peter Timothy became an ardent supporter of the patriot cause. Fearing the British would confiscate his press, Timothy temporarily suspended publication from 1775 to 1777. Yet, when news of the Declaration reached Charleston in early August of 1776, he quickly rebuilt his press to spread the news. He paid a high price for his patriotism. He was arrested in 1780 on charges of treason and spent time on a British prisoner-of-war ship before being sent to a prison in St. Augustine, Florida. His family was exiled by the British to Philadelphia. After the war, Peter was sailing to Antigua when he was lost at sea. His wife inherited the printing business.

This broadside is not only the earliest printing of the Declaration in Charleston; it is also the only known existing copy of the document printed by Peter Timothy.

We hold these Truths to be self–evident, that all men are created equal, that they are endowed by their Creator with certain unalienable Rights, that among these are Life, Liberty, and the Pursuit of Happiness – That to secure these Rights, Governments are instituted among Men, deriving their just Powers From the Consent of the Governed, that whenever any Form of Government becomes destructive of these Ends, it is the Right of the People to alter or to abolish it, and to institute new Government, laying its Foundation on such Principles, and organizing its Powers in such Form, as to them shall seem most likely to effect their Safety and Happiness. Prudence, indeed, will dictate that Governments long established should not be changed for light and transient Causes; and accordingly all Experience hath shewn, that Mankind are more disposed to suffer, while Evils are sufferable, than to right themselves by abolishing the Forms to which they are accustomed. But when a long Train of Abuses and Usurpations, pursuing invariably the same Object, evinces a Design to reduce them under absolute Despotism, it is their Right, it is their Duty, to throw off such Government, and to provide new Guards for their future Security. Such has been the patient Sufferance of these Colonies; and such is now the Necessity which constrains them to alter their former Systems of Government. The History of the present King of Great Britain, is a History of repeated Injuries and Usurpations, all having in direct Object the Establishment of an absolute Tyranny over the States. To prove this, let Facts be submitted to a candid World.

Read the introduction and transcript and view the document. Use information from these as well as your knowledge of American history to answer the following questions.