Emma Goldman on the restriction of civil liberties, 1919

A Spotlight on a Primary Source by Emma GoldmanAlexander Berkman 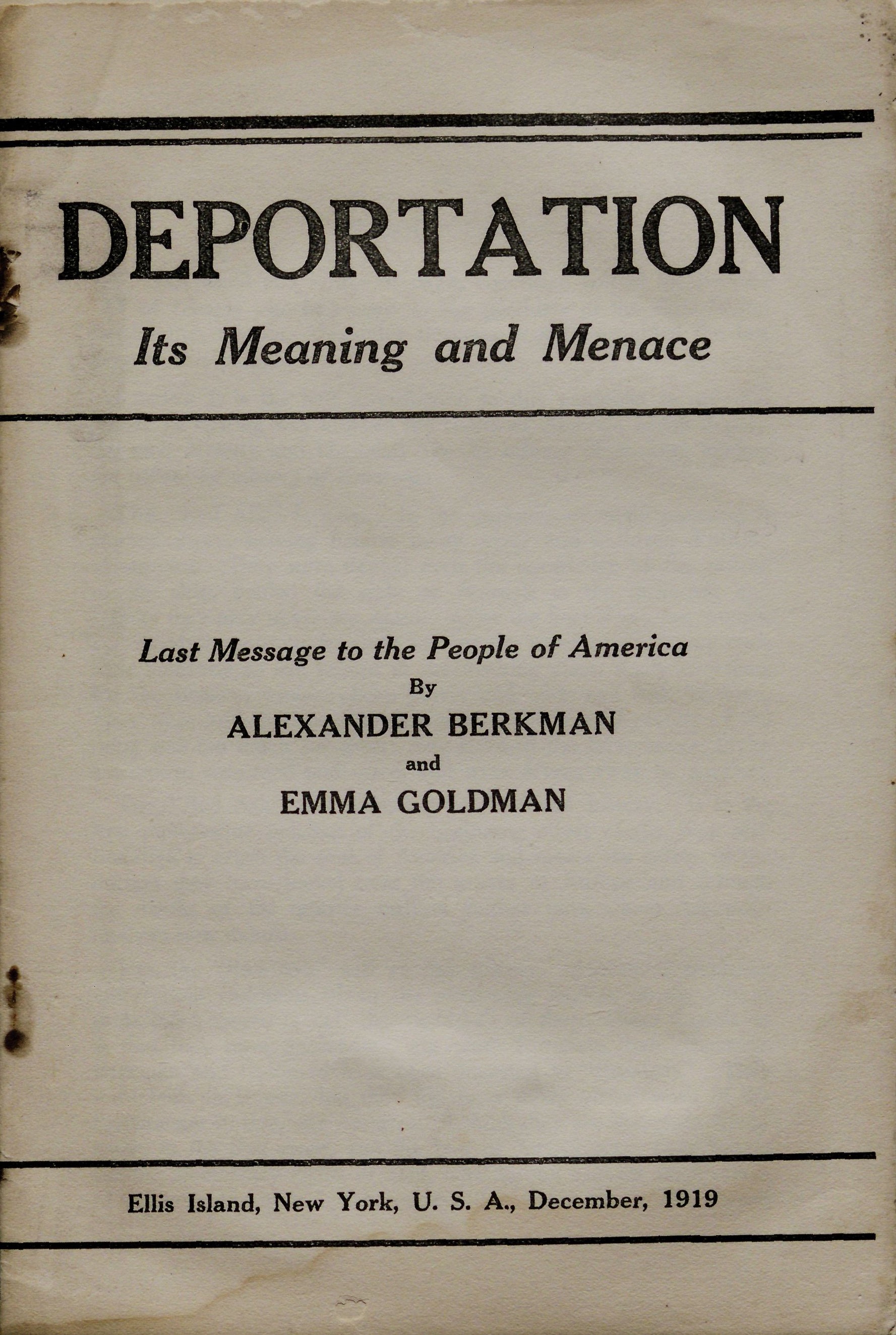 Emma Goldman was born to a Jewish family in Kovno, Russia (present-day Lithuania). In 1885, at the age of sixteen, she emigrated to the United States, becoming a well-known author and lecturer promoting anarchism, workers’ rights, birth control, and other political and social movements. Anarchists believed that people could naturally govern themselves without systematic controls. They openly rejected US involvement in World War I, and their anti-government activities concerned many in authority.

During World War I, Goldman actively protested the war and encouraged men not to register for the draft. Arrested on June 15, 1917, Goldman was prosecuted and convicted “for conspiring against the draft” under the Espionage Act. The Espionage Act of 1917 made it illegal to pass information that could impede the military’s efforts or that could support the enemy. The Sedition Act of 1918 supported and expanded the Espionage Act by forbidding “disloyal, profane, scurrilous, or abusive language” about the military or government.

In 1917, Emma Goldman was sentenced to two years in prison. Upon her release in 1919, J. Edgar Hoover, the director of the Justice Department’s General Intelligence committee, persuaded the courts to deny her citizenship claims, making her eligible for deportation. She wrote Deportation—Its Meaning and Menace with Alexander Berkman, her romantic partner and fellow anarchist, on Ellis Island in 1919 before being sent back to Russia.

In the excerpts below, Goldman criticizes the US government for its use of the Espionage and Sedition Acts against those who were suspected of holding “certain unpopular or ‘forbidden’ opinions.”

THE war is over, but peace there is not. On a score of fronts human slaughter is going on as before; men, women, and children are dying by the hundreds because of the blockade of Russia; the “small nations” are still under the iron heel of the foreign oppressor: Ireland, India, Egypt, Persia, Korea, and numerous other peoples, are being decimated and exploited even more ruthlessly than before the advent of the Great Prophet of World Democracy; “self-determination” has become a by-word, nay, a crime, and world-wide imperialism has gotten a strangle hold upon humanity.

WHAT, then, has the Great War accomplished? To what purpose the sacrifice of millions of human lives, the unnamable loss in blood and treasure? What, especially, has happened in these United States?

FRESH in mind are still the wonderful promises made in behalf of the War. It was to be the last war, a holy crusade of liberty against tyranny, a war upon all wars that was to sweep the earth clear of oppression and misery, and make the world safe for true democracy. . . .

TRUE, it was but yesterday [the American people’s] sovereign will registered a mighty protest against human slaughter and bloodshed. With a magnificent majority they had voted not to participate in the foreign War, not to become entangled in the treacherous schemes of European despotisms. Triumphantly, they had elected as President of the United States the man who “kept them out of the war” that he might still keep them out of it.

THEN suddenly, almost over night, came the change. From Wall Street sounded the bugle ordering the retreat of Humanity. Its echo reverberated in Washington, and thence throughout the whole country. There began a campaign of war publicity that roused the tiger in man and fed his lust for blood and vengeance. The quiet, phlegmatic German was transformed into the “Vicious Hun,” and made the villain of the wildest stories of “enemy” atrocities and outrages. The nation-wide propaganda of hatred, persecution, and intolerance carried its subtle poison into the hearts of the obscurest hamlet, and the minds of the people were systematically poisoned and perverted by rivers of printer’s ink. The conscience of America. wanting peace, was stifled in the folds of the national emblem, and its voice drowned by the martial beat of a thousand war drums.

HERE and there a note of protest was heard. Radicals of various political and social faiths—Anarchists, Socialists, I. W. Ws., some pacifists, conscientious objectors, and other anti-militarists—sought to stem the tide of the war hysteria. They pointed out that the people of the United States had no interest in the European War. That this country, because of its geographical location and natural advantages, was beyond all danger of invasion. They showed that the War was the result of European over-preparedness for war, aggravated by a crisis in capitalist competition, old monarchical rivalries and ambitions of super-despotic rulers. The peoples of Europe, the radicals emphasized, had neither say nor interest in the war: they were the sheep led to slaughter. . . . America’s great humanitarian mission, the war protestants insisted, was to keep out of the war, and use its potent financial influence in compelling economic and financial power to terminate the European slaughter and bring peace to the bleeding nations of the old world.

BUT these voices of sanity and judgment were lost in the storm of unloosed war passions. . . . The jail and lynch law for them; execution and persecution by their contemporaries. But if it be true that history repeats itself, surely these political "criminals" of today will be hailed tomorrow as martyrs and pioneers. . . .

WHAT means the administrative process?

IT means the suppression and elimination of the political protestant and social rebel. It is the practice of picking men upon the street, on the merest suspicion of “political untrustworthiness,” of arresting them in their club rooms or homes, tearing them away from their families, locking them up in jails or detention pens, holding them incommunicado for weeks and months, depriving them of a hearing in open court, denying them a trial by jury, and finally deporting them or banishing them to unknown shores. All this, not for any crime committed or even any punishable act charged, but merely on the denunciation of an enemy or the irresponsible accusation by a Secret Service man that the “suspect” holds certain unpopular or “forbidden” opinions.

LEST the truth or accuracy of this statement be called in question, let it be stated that at this very moment there are one hundred such "political suspects" held at Ellis Island, with several hundred more in the various Immigration Detention jails. . . . Not one of them is charged with any specific crime; one and all are accused of entertaining "illegal" views on political or Social questions. Nearly all of them have been seized on the street or arrested in their homes or reading-rooms while engaged in the dangerous pursuit of studying the English language, mathematics, or American history. (The latter seems lately to be regarded by the authorities as a particularly dangerous occupation, and those guilty of it a prima facie menace to our American institutions.) Others were arrested in the factory, at their work bench, or in the numerous recent raids of homes and peaceful meetings. Many of them were beaten and clubbed most brutally, the wounds of some necessitating hospital treatment in the police stations they were subjected to the third degree, threatened, tortured, and finally thrust into the bull pens of Ellis Island. Here they are treated as dangerous felons, kept all the time under lock and key, and allowed to see their wives and families only once a week, with a screen between them and malicious guards constantly at their side. Here their mail is subjected to the most stringent censorship, and their letters delivered or not, according to the whims of the petty officials in charge. Here some of them, because they dared protest against their isolation and the putrid food, were placed in the insane asylum. Here it was that the brutal treatment and unbearable conditions of existence drove men and women, the politicals awaiting deportation, to the desperate extremity of a hunger strike, the last resort of defenseless beings, the paradoxical self-defense of despair. For weeks and months these men have now been kept prisoners at Ellis Island, tortured by the thought of their wives and children whom the Government has ruthlessly deprived of support, and living in constant uncertainty of the fate that is awaiting them, for the good American Government, refinedly cruel, is keeping their destination secret, and certain death may be the goal of the deportees when the hour of departure finally strikes.

SUCH is the treatment and the fate of the first group of Russian refugees from American "democracy." Such is the process known as the administrative methods, penalizing governmentally unapproved Thought, suppressing disbelief in the omniscence of the powers that be.

WHAT a striking comment this case afford on the true character of government, and the chicanery and subterfuge it resorts to when legal means fail to achieve its purposes. Long did the United States Government bide its time. The moment was not propitious to get rid of Emma Goldman. But she must be gotten rid of, by fair means or foul. Yet public sentiment was not ready for such things as deportation and banishment. Patience! The hour of a great popular hysteria will come, will be made, if necessary, and then we shall deport this bete noir of government.

THE moment has now come. It is here. The national hysteria against radicals . . . has created the atmosphere needed to introduce in America the principle and practice of banishment. At last the Government may deport Emma Goldman, for through the width and breadth of the country there is not a Judge—and possibly not even a jury—with enough integrity and courage to give this enfant terrible a fair hearing and an unprejudiced examination of her claim to citizenship.

THEREFORE Emma Goldman is to be deported.

BUT her case sets a precedent, and American life is ruled by legal precedents. Henceforth the naturalized citizen may be disfranchised, on one pretext or another, and deported because of his or her social views and opinions. Already Congress is preparing to embody this worthy precedent in our national legislation by passing special laws providing for the disenfranchisement of naturalized Americans for reasons satisfactory to our autocratic regime.

THUS another link is forged to chain the great American people. For it is against the liberties and welfare of the people at large that these new methods are fundamentally directed. Not merely against Emma Goldman, the Anarchists, the I. W. Ws., Communists, and other revolutionists. These are but the primary victims, the prologue which introduces and shadows forth the tragedy about to be enacted.

A partial transcript is available here.