The end of the Vietnam War: conscience, resistance, and reconciliation, 1973

A Spotlight on a Primary Source by Edward M. Kennedy 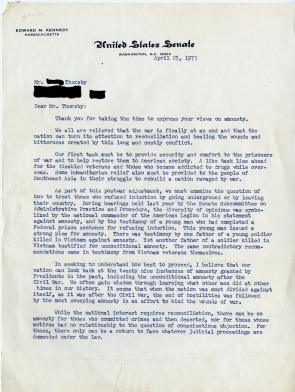 Vietnam was "America’s longest war." While US operations tended to be very limited between 1945 and 1964, escalation in the early months of 1965 eventually led to the deployment of more than 2.5 million military personnel to South Vietnam through 1973.

In January 1973, the Paris Peace Accords officially ended US involvement in the Vietnam War, although the majority of US troops would not leave until August of that year and the fighting between North and South Vietnam would continue until the fall of Saigon in 1975. Americans faced the daunting task of reuniting their own country torn apart by participation in a politically divisive and brutal conflict halfway around the world. The American public had become polarized in a way that it had not been since the Civil War.

This letter, written in April 1973 by Senator Edward Kennedy, discusses the need to care for those who served in Southeast Asia and to forgive those who "refused induction" for moral reasons so "that the nation can turn its attention to reconciliation and healing the wounds and bitterness created by this long and costly conflict."

Although the question of amnesty occupies more than half of this letter, Kennedy made it clear that caring for America’s servicemen was his top priority:

But the first and immediate task is to care for the addict, the jobless and the wounded veterans home from Southeast Asia. It is our nation’s responsibility to help them right now. And only after we can insure that they are given every opportunity to rebuild their lives, can we then seek the answers to amnesty with the ultimate goal of restoring to our country the unity which this long and cruel conflict divided.

The issue of amnesty was tackled by Presidents Gerald R. Ford and Jimmy Carter. On September 16, 1974, President Ford issued a conditional amnesty proclamation for those who had evaded the draft, provided that they reaffirmed their allegiance to the United States and agreed to serve two years in a public service job. In 1977, just one day after his election, President Carter unconditionally pardoned anyone who had avoided the draft.

Unfortunately, Kennedy’s hopes for supporting servicemen returning from Southeast Asia were not realized. Many returned home to hostile receptions, limited mental health care, and a public that did not understand or want to understand the horrors servicemen had faced in combat.

View all pages of the letter here.

Read the document introduction, view the image, and read the letter. Then apply your knowledge of American history in order to answer the following questions.