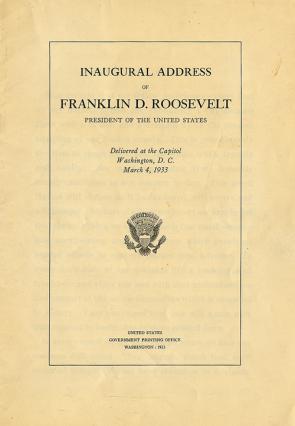 When Franklin Delano Roosevelt gave his first inaugural address on March 4, 1933, the nation was reeling from the Great Depression and was dissatisfied with the previous administration’s reluctance to fight it. Roosevelt declared that, by electing him, the American people had "registered a mandate that they want direct, vigorous action."

The address is most remembered for FDR’s statement that "the only thing we have to fear is fear itself," but it is also a declaration of war against economic hardship, a call to Americans to work together to face "the dark hour," and a notice of his intention to reorganize and redirect government action. In laying out his approach to rescuing the economy and tempering the steadily rising rate of unemployment, he is realistic about the future, but remains hopeful: "Only a foolish optimist can deny the dark realities of the moment. Yet our distress comes from no failure of substance. . . . Compared with the perils which our forefathers conquered because they believed and were not afraid, we have still much to be thankful for."

The New Deal began almost immediately. The Emergency Banking Relief Act was signed five days after the inauguration and was joined by numerous programs and agencies, some more successful than others.

A pdf of the document is available.

This is preeminently the time to speak the truth, the whole truth, frankly and boldly. Nor need we shrink from honestly facing conditions in our country to-day. This great Nation will endure as it has endured, will revive and will prosper. So, first of all, let me assert my firm belief that the only thing we have to fear is fear itself—nameless, unreasoning, unjustified terror which paralyzes needed efforts to convert retreat into advance. In every dark hour of our national life a leadership of frankness and vigor has met with that understanding and support of the people themselves which is essential to victory. . . .

The Nation asks for action, and action now.

Our greatest primary task is to put people to work. This is no unsolvable problem if we face it wisely and courageously. It can be accomplished in part by direct recruiting by the Government itself, treating the task as we would treat the emergency of a war, but at the same time, through this employment, accomplishing greatly needed projects to stimulate and reorganize the use of our national resources. . . .

. . . in the event that the national emergency is still critical, I shall not evade the clear course of duty that will then confront me. I shall ask the Congress for the one remaining instrument to meet the crisis—broad Executive power to wage a war against the emergency, as great as the power that would be given to me if we were in fact invaded by a foreign foe.

<p>Read the introduction, view the images of the pamphlet printing of the address, and read the excerpts of Franklin D. Roosevelt’s First Inaugural Address. Then apply your knowledge of American history to answer the following questions:</p>
<p>*** NOTE: Recordings exist of FDR’s first inaugural speech. A search of the web will reveal an authentic and attributable excerpt at the <em>History Matters </em>site. Students may benefit by following along, listening to not only the message but also the cadence and patrician speech patterns of the President reading the text.</p>
<ol>
<li>Why does the newly elected President Franklin Roosevelt note that he is taking office at a particularly “dark hour of our national life”?</li>
<li>How does Roosevelt suggest that the massive problem facing the national should be addressed?</li>
<li>Why do you think FDR uses the analogy to paralysis to illustrate the problem facing the nation and also a potential cure?</li>
</ol>
<p style="margin-left: 40px;"><u>Extra Assignment</u>: How does FDR’s speech indicate that he would seek to expand the power of the president beyond that of his immediate predecessors?</p>
<h6>A printer-friendly version is available&nbsp;<a href="https://www.gilderlehrman.org/sites/default/files/inline-pdfs/00675_FPS…; title="here">here</a>.</h6>